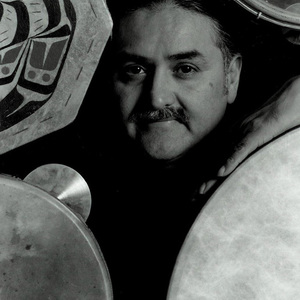 Glen Velez, Three-time Grammy Award winning master drummer, composer and educator Glen Velez is considered one of the most influential percussionists of our time, as well as being responsible for a world-wide resurgence in the popularity of the frame drum. His teaching and performances inspired the Remo Drum Co. in 1983 to develop a line of frame drums called the Glen Velez Signature Series. The Cooperman Drum Co. introduced a hand made Signature Series Glen Velez Tambourine and Frame Drum line in 1999.

Glen Velez is considered one of the most influential percussionists of our time, as well as being responsible for a world-wide resurgence in the popularity of the frame drum.

In 1989 twentieth century composer, John Cage acknowledged Velez' mastery when he wrote a piece especially for him, entitled "Composed Improvisation for One-sided Drum with or without Jingles." Glen has also gained international recognition as a solo artist and is also known for his 15 year recording and performing collaborations with composer Steve Reich, as well as the Paul Winter Consort.

His own compositions have been featured on National Public Radio's All Things Considered and John Schaefer's New Sounds and have been commissioned by the Rockefeller Foundation, Jerome Foundation, and Reader's Digest. He has written music for theater and dance and recorded hundreds of albums on ECM, CBS, RCA, GRP, Warner Brothers, Deutsche Gramophone, Geffen, Nonesuch, Capital, and Sony.

Glen has several instructional videos, 5 instructional books and over a dozen recordings of his own music on CMP, Music of the World, Sounds True, Interworld, Ellipsis Arts and DafTof Records. Glen is a master teacher who conducts workshops worldwide and has published numerous books and articles on the subject. Velez developed his own teaching approach called ?The Handance Method.? It incorporates voice and body movement into the process of learning to play the frame drum and has been presented in hundreds of universities worldwide. He currently teaches frame drums at the Mannes School of Music, as well as series of master classes at The Julliard School and Manhattan School of Music.

While Glen draws upon the great drumming traditions of the Middle East, South India and the Mediterranean world (ancient and modern), he plays in a style all his own. Utilizing a vast culmination of complex hand and finger techniques, a symphony of sounds and textures remarkably stream forth from just a single hand held drum. Glen's solos seem supernatural, a technical rarity that is beyond comprehension. However, beyond all the jaw-dropping spectacle of Glen's super-human techniques, is a music that is so deeply emotional, a raw beauty, that perhaps, within it's core, resides the most universal rhythm of all - the heart beat.

Glen is also an expert in Central Asian Overtone Singing (split-tone/harmonic singing). During concerts, he often gives his audiences a spontaneous crash course in this style, thus resulting into a spirited interactive overtone choir.

In the ancient Mediterranean world, frame drumming was an omnipresent tool of ritual. The use of the frame drum, shaker and voice are instruments most commonly used wherever shamanic healing practices are found. These healing and celebratory themes are audible threads that weave all through Glens recordings and live performances.

Rhythms Of The Chakras