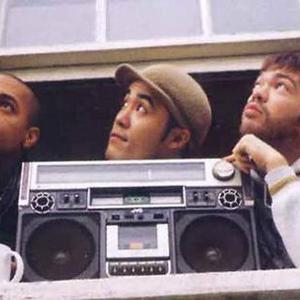 In the animal kingdom, the giant panda is a symbol of resilience for all animals on the brink of extinction. In the unforgiving world of hip-hop, Giant Panda is a symbol of remembering traditions without forgetting progression. The story of Giant Panda starts on the playground of a Seattle elementary school where Maanumental and Newman quickly bonded through their love of comic books and hip-hop tapes. Years later, Newman would venture to L.A.

The story of Giant Panda starts on the playground of a Seattle elementary school where Maanumental and Newman quickly bonded through their love of comic books and hip-hop tapes. Years later, Newman would venture to L.A. where he would meet Chikaramanga while attending college. Soon the two would DJ together around campus and record with a crew that formed around Chikaramanga's production skills. Newman would go back to Seattle on breaks and play tapes of the songs for Maanumental, who in turn would play tapes of the tracks he was making with his brother, Sir Kado.

Pretty soon the two different crews started to collaborate, and pretty soon Maanumental and Newman made the move to LA. After a stint with another group, the core of Maanumental, Newman, Chikaramanga (along with the help DJ Superbrush 427 and Sir Kado) would break off and start their own group. And when it was time for name, they went to an old name for a fake rock band they were going to start: Giant Panda. What else would you call a group made up of white, black, and Asian guys?

Their first release would be "88 Remix" (UKJ-001 Dec. 2003), a hard-hitting 12-inch recorded by Thes One at the legendary PUTS studio. Put out independently under the Ukenjam label, the single had a small run but was able to get airplay on mix shows across the globe. It even received single of the month by prestigious Hip-Hop Connection magazine from England. Giant Panda then came out with their first release on Tres Records, "With It" (TR369-002 Sep. 2004). The 12 caught the attention of mix show DJ's from Japan, the US, Canada, UK, and as far as the Czech Republic. It also received raves from print critics, most notably in XXL magazine where Chairman Mao praised it in his "Chairman Choice" column.