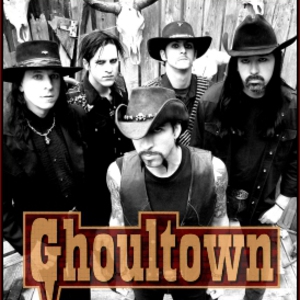 The devilishly eclectic Ghoultown have thrilled, marauded and rocked their way across the nation for over a decade. Born in Texas and fronted by the infamous Count Lyle (a.k.a. Lyle Blackburn), Ghoultown is home to the most talented band of deviants this side of hell. Boasting collaborations with Chris Telkes (Nocturne) and Sara Lee Lucas (Marilyn Manson), their tracks are described by Synergy Magazine as "the ultimate embodiment of tequila drinking hillbilly rock". The band's sixth studio effort, LIFE AFTER SUNDOWN, proves to be their most ambitious material to date.

The album is a unique mix of horror rock, punk-twang and spaghetti western flair. Think of it this way--if Rob Zombie and Johnny Cash were tossed into a meat packer, Ghoultown is what would come out the other side.

Ghoultown's musical alchemy has attracted a wide range of dedicated fans and caught the attention of the entertainment industry. Their singles have amassed over 30,000 downloads, earning the band national radio play, global licensing deals and even a nod in the award-winning Vampire Masquerade: Bloodlines video game. Featured on over a dozen independent and studio film soundtracks, Ghoultown even possessed the director of American Nightmare to rearrange the script and include a band performance after witnessing them play live. Always on the move, they are also fixture at major entertainment conventions including Spooky Empire, Dragon*Con and Texas Frightmare Weekend.

Ghoultown's raucous, decadent and high-octane live performances have garnered a loyal nationwide fanbase opening for the likes of Hank III, The Misfits, and Gorgeous Frankenstein. After conquering the Texas live circuit, the band took their act on the road. From New York's infamous CBGBs to Bar Sinister in Los Angeles, no saloon or concert hall is safe. Their influence and popularity has bleed into Europe, with a European tour in the works for early 2010.

In addition to the success of LIFE AFTER SUNDOWN and SKELETON COWBOYS - their latest single on Zoviet Records - Ghoultown was recently invited to write and perform a new theme song for iconic horror maven, Elvira. The star-studded tribute was recently released as the MISTRESS OF THE DARK ultra-single, complete with a DVD featuring the music video by director Gris Grimly and an audio CD of new songs including ?Mistress of the Dark? and remixes.

Hailed as pioneers of hellbilly rock, Ghoultown continues to make hearts race and skin crawl as they bring their unique brand of music to more fans. Recently, the band embarked on their first international tour with shows in Germany, Poland, and Slovakia. Notable gigs included a performance at the legendary WGT festival in Leipzig, as well as, a string of dates with German horror-rockers, The Fright. So stay tuned as Ghoultown continues their pursuit to capture souls across the world!

Ghost Of The Southern Son

Mistress Of The Dark

Tales From the Dead West