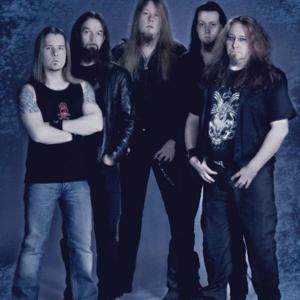 The idea of forming my ?own? band started somewhere in Spring '02. I was helping one of my friend to get his musical career back to its course and I offered him a song I made to the Burning Point ( but I guess that the other guys in BP didn't share my enthusiasm towards that song so it was kind of ?left? over...). Back then I was in the middle of the Feeding the Flames recording sessions so I kind of ?forgot ? the whole thing and the next time I saw my friend he told that they had enough songs of their own already so...

the song was ?left? over again...
that poor thing was Temples of Gold.

Then it hit me , there was not going to be the third time...
I contacted one my friend who was the guitar player in
one of my hometown bands and we started demoing couple of
my songs?But suddenly he had his handfull of other ?projects?
so that one died right there...

Totally frustrated of that situation I finally called
Tapsa and Jussi in the end of the year '02.
After about 5 rehearsals we had something like
12 ?new ? songs...
The word new is used very cautiously here because few of
these songs I've made years ago...
But I have ?modernized? or ? up to date?
them a little bit so they sound very new,
even to me! Finally in Spring '03 we had our first
demo cd ready ( called , Ghosts in the Castle)
and I started sending it all over the world.
After a few negotiations of some of the record labels
we decided to make a record deal with Sound Riot Records,
I guess that mainly because they share the
same enthusiasm towards our music as we did...