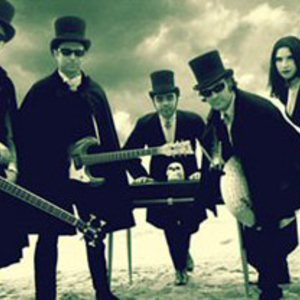 Hailing from Van Nuys, California these swingin' undertakers took their inspiration from the hopped up sounds of early sixties surf and hotrod outfits like The Lively Ones, Avengers VI, The Del-Aires, New Dimensions and the Fender IV and mixed it with their obsession with late night monster movies, Halloween records and Screaming Lord Sutch to patent their own brand of "spooky surf". In 1997 The Ghastly Ones recorded their debut album "A-Haunting we will Go-Go", which was released world-wide by Geffen Records.

They toured with the Brian Setzer Orchestra and Southern Culture on the Skids and even composed and recorded music for the Halloween episode of the ever popular cartoon show, SpongeBob Squarepants!
After an extended hiatus, The Ghastly Ones returned to haunt the airwaves with a 10 song EP of rare and unreleased tracks titled "All Plastic Assembly Kit". This limited edition CD quickly sold out. A brand spankin' new, all original CD titled "Target: DRACULON" is their latest output.

Taken from the Ghast Ones MySpace.