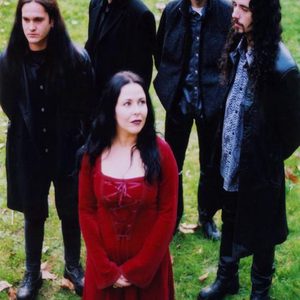 1. Based in Portugal, Aenima began in 1997 by guitarist Rune (ex-Millennium) and singer Carmen (ex-Poetry of Shadows, ex-Isiphilon). Their shared philosophy of a higher esthetic spirituality through music was the impetus for Aenima - a play on the Latin word anima meaning soul. As songwriters, the vision for the new band would beat a path laden with organic rhythms and more emotional textures, yet always flirting with the darker aspects of sound.

'Sentient', released in 2003 by US Label Middle Pillar Presents, is an hour of music that captures the essence of the band through layers of guitars, a spirited rhythm section and vocal harmonies that enliven the heart. In the summer of 2004 AEnima met with Carlos Maria Trindade (Keyboardist of famous Portuguese group Madredeus) with whom they co-produced a tribute cover song of a Cult Portuguese band M?o Morta called 'Anjo do Desespero'. Later that year, they released through Tenser Productions a limited Split Picture 7'' with the exclusive track 'Puppet Circus', which was the motto behind the subsequent Tour 'The Puppet Circus comes to Town' from November to December in Portugal.

Early in 2005, the Puppet Circus did leave town and with it took two of the band's members - guitarist Pedro and singer Carmen - a strange loss that propelled the remaining members to take some time off to travel and do some soul-searching. Getting together after some months, they were introduced to singer Susana and immediately realized she was perfect to pursue AEnima's renewed vision of hope and their unique ethereal universes. Fueled by this breath of fresh air, the band is currently preparing their new album as well as a sensor-driven interactive stage show which strengthens and consolidates their reputation as creators of magical worlds.

2. Aenima is a hardcore/grindcore band from Nancy, France. They release a demo 'Chainsaw is the law' in 2000 and a CD 'Hippie Hunter' in 2005. One of their guitar players later joined Blockheads.