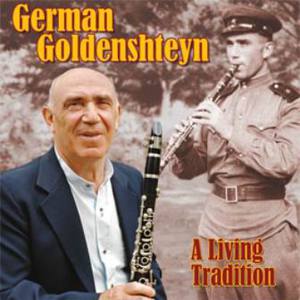 German Goldenshteyn, or Goldenshtayn (2 September 1934 ? June 10, 2006) was born in the Bessarabian shtetl of Otaci, then in Romania, now in Moldova. He was a clarinetist and musicologist who brought his native region's klezmer tradition to the USA. In 1994 he arrived with nearly a thousand klezmer tunes (many previously unknown) that he had transcribed over the years. This repository of tunes, together with the many concerts and workshops he gave, made a significant contribution to the klezmer revival in North America as it was one of the biggest collections of klezmer music.

Goldenshteyn was a featured performer in the Center for Traditional Music and Dance's Soviet Jewish project called "Nashi Traditsii" or "Our Tradition" between 1998 and 2002. He also appeared at workshops organised by the New England Conservatory of Music and Poland's Borderland Foundation.

"You felt it in his playing, in his presence, in his whole being, that he was a bridge to ? a repository of ? this entire culture," Michael Alpert, another klezmer musician and musicologist, told The New York Times. "He's the closest thing that the klezmer revival has had to a Woody Guthrie or a Leadbelly."

He recorded a CD of his music in December 2005 at Klezkamp, backed up by a group of notable younger klezmorim. Another CD recorded separately is planned for release.