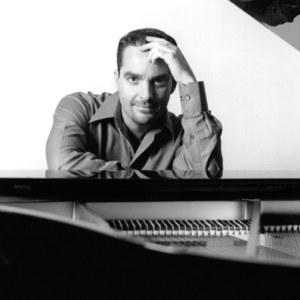 George began his love for the piano at the early age of five. His mother was classically trained and George would sit on the piano bench next to her to watch and listen. One day he started playing along. It wasn't too long before George was figuring out the melodies of songs he heard on the radio. During holidays and special occasions George staged concerts in the living room of his family home for captive audiences made up of family members and friends (often requesting the guests to sit in the other room as he played.)

Despite the stage fright that he would experience, George would enter his Elementary School talent shows each year. His father would often take him to the piano stores at the local mall and people would gather around watching this little kid do his thing. At the age of 10, his parents encouraged piano lessons, but in five weeks the lessons were over after his teacher discovered George was playing the lessons without reading the music. He never attempted lessons again.

As a teenager, Skaroulis began a career in the restaurant industry, and dedicated over 20 years of his life to the business. Time at the piano was often his own private escape, and Skaroulis, shy about his lack of formal training, was very selective about performing publicly. Never had he considered pursuing his love of music as a career, but over the years, the piano kept calling him back.

The message was loud and clear to Skaroulis after attending a Yanni concert years ago. He was amazed and moved by the music, and at the audience's response. Realizing that perhaps his music had a chance to touch people, Skaroulis recorded his debut album Homeland in 1996. With a very positive response, Skaroulis was inspired to compose more music and continue following his dream. The Homeland album was followed by Numinous, Season Traditions, Generations, Return to Homeland, Second Nature, Athena, Forever Young, and Sanctuary. In late 2007, Skaroulis released a Spa Collection titled, Reunion.

To this day George doesn't read music, and without those formal boundaries, he continues to create music in his own peaceful romantic style. George's music undoubtedly has a calming effect on those who listen, and it is no surprise this relaxing quality has attracted its use in spas and by massage therapists worldwide.

This year, George celebrates the 10th year of his independent record label Evzone Music. In addition to the several CD releases on his own label, Skaroulis' music has captured the attention of other record labels including Essence Records (Chris Spheeris), Real Music, Bon Music (Korea), Orange Music (Singapore) and Sharper Image ? all of which have licensed his music and talent for albums in which they distribute.

ATHENA - The Best of George Skaroulis