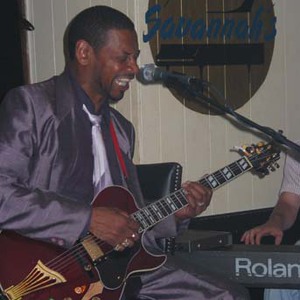 Dressed to the nines in a fine suit, gold, leather, fur collar and the patented G clef etched into the hair on the back of his head, electric bluesman George Boone immediately changes the atmosphere of any room he's in. A commanding presence, this veteran singer/songwriter/guitarist promises an intensely explosive marriage of emotion and technique in performance. And he always delivers. Stranger in My Hometown was cut in one afternoon in a converted church studio in Rensselaer, New York.

Stranger in My Hometown was cut in one afternoon in a converted church studio in Rensselaer, New York. Veteran blues critic Don Wilcock calls George Boone "one of the best blues guitarists/singer/songwriters in the world." And he says of this debut album, "Angry isn't a strong enough word to describe the dangerous and predatory emotions laid down and burned off in this fantastic album recorded in one day at Cathedral Sound." Other critics have called it
"scathing, angry, raw and tough as leather." "(It) smolders and explodes like Boone's live shows," says Mike Hochanadel in The Schenectady Gazette.

Boone has performed recently in Europe and played an American summer tour in 2002 with his band, including a Fourth of July date at the W.C. Handy Award-winning Waterfront Blues Festival in Portland, Oregon. His lead vocal and scorching guitar work on the title cut of Johnnie Marshall's recent JSP album 98 Cents in The Bank prompted Blues Revue's Art Tipaldi to say, "Boone shows the world the future of the blues is in capable hands by slam-dunking the title cut."

Like so many in blues, George Boone had to wait decades for his recording "debut." Gulf Coast blues legend Phillip Walker cut Boone loose from his band in 1987, telling him to "go out and kick some ass." The young firebrand had already toured Europe with Walker, sharing festival stages in Germany, France and Holland with Robert Cray, Johnny Littlejohn, Jimmy Rogers and Wild Child Butler. Boone's late father began taking his eight-year-old son to live performances at clubs along "the Miracle Mile" in New York Capital Region more than three and a half decades ago. By the age of 12, George was on stage with these same performers, closing his eyes to block out the fear as he showed them he'd learned his lessons well. While compared to everyone from jazz master Wes Montgomery to the late Screamin' Jay Hawkins, with whom he also toured, Boone says a big influence was sax player Hank Johnson whom he met while Johnson was doing 25 to life.

Since 1987, Boone has been honing a crack band in hometown Schenectady, New York. The group has won numerous Best Blues Band awards and represented the Northeast Blues Society in Memphis at the 1997 Blues Foundation International Blues Talent contest where they were written up in a five-page article in The King Biscuit Times Blues Journal. Boone drove 1300 miles nonstop in one of two rented Bonnevilles and performed with his leg in a heavy cast. Forgetting the cast and a 10-minute time limit, Boone ran over his allotted time and lost the contest, but won the respect of his fellow competitors.The quality of the George Boone Band's debut album has made its title immediately out of date. The vote of confidence from hometown newspapers was unanimous in its praise. Metroland, the New York Capital Region arts weekly, said: "What caught our attention this year was the group's scathing new album, Stranger In My Hometown, which captures how Boone's from-the-gut vocals and piercing leads interact with the passionate musicianship of his four sidemen."Those sidemen include longtime friend and schoolmate Raoul Bowman on bass, Mike Catrambone on sax, pianist Tim Fiato, Jr., and drummer Mark McKay.

Stranger in My Hometown