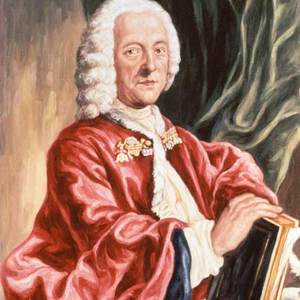 Georg Philipp Telemann (14th March 1681?25th June 1767) was a German Baroque composer, born in Magdeburg. Self-taught in music, he studied law at the University of Leipzig. The most prolific composer of his era, he was a contemporary of Johann Sebastian Bach and a life-long friend of Georg Friedrich H&auml;ndel. While in the present day Bach is generally thought of as the greater composer, Telemann was more widely renowned for his musical abilities during his lifetime.

Telemann traveled widely, absorbing various musical styles and incorporating them into his own compositions. He is known for writing concertos for unusual combinations of instruments, such as multiple violas or trumpets.

He held a series of important musical positions, culminating in that of music director of the five largest churches in Hamburg, from 1720 until his death in 1767. He was succeeded by his godson Carl Philipp Emanuel Bach.