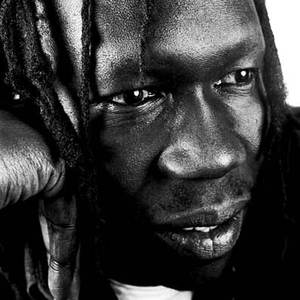 Geoffrey Oryema is an internationally renowned Ugandan musician. At the age of 24, at the height of Idi Amin's power, Oryema was smuggled across the Ugandan border in the trunk of a car, following the death of his father, a prominent government minister, beginning a life in exile. Today his songs keep alive the languages of his youth - Swahili and Acholi and return to the lost country - the 'clear green land' of Uganda.

Most artists have to pay their dues, but very few have to be smuggled out of their birth countries to avoid death on the way. But for Geoffrey Oryema, that was the only way to survive. Born in Uganda, he was the son of a civil servant who was a police chief and then a cabinet minister and from his father he learned the local folk music, as well as the nanga (the harp), in addition to studying Western music in school. However, these were dangerous times in the country, with the mad dictator Idi Amin in power, and in 1977, Oryema's father fell victim, being one of many who was murdered by the armed forces. Oryema knew he was likely to be killed soon, unless he got out. Thanks to friends, he was smuggled across the border to Kenya in the trunk of a car to safety. Or, rather, relative safety. He was in a place with no family or friends and began his wanderings, which saw him eventually making his way to Paris.

In the early '80s, Paris was Africa central, at least as far as music went. But it was the Africa of the dancefloor, given a quick studio spit-and-polish with synthesizers and drum machines -- all very far from the more introspective musicality of Oryema's songs. However, he persisted, becoming influenced as much by rock & roll as anything else, eventually creating a shimmering kind of strongly rooted African pop which attracted the Real World label. He was paired with producer Brian Eno for Exile, which was very much the curate's egg -- good in parts, especially Oryema's parts, but too atmospheric elsewhere. With that under his belt, he began to play the WOMAD international circuit of world music festivals, returning to the studio for 1993's Beat the Border, where his lush melodies and open-voiced singing created a lush whole. Four years later came the third album, Night to Night, which was decidedly more Western in its influences, melding Africa, Europe, and the U.S. into a whole (in part thanks to producer Daniel Lanois), without dilution of any of the strands. Now based in the French province of Normandy, he continued to live quietly, releasing Spirit in 2000. ~ Chris Nickson, All Music Guide

Oryema earned his international reputation following the release of his second album, Beat the Border. He has collaborated with, amongst others, Peter Gabriel. Gabriel's record label, Real World, helped with the first three of Oryema's albums, until his move to Sony International, a label established in France where Oryema resides since his exile. Besides his two native languagues mentioned earlier, he also sings in English and French.

On July, 2005 he performed at the LIVE 8: Africa Calling concert in Cornwall, and with 1 Giant Leap at the Live 8 Edinburgh concert.