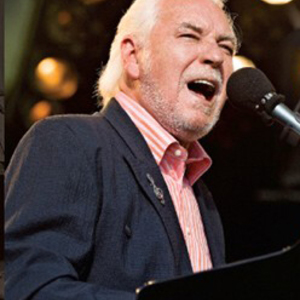 Gary Brooker, MBE, (born 29 May 1945, Hackney, East London), is an English singer, songwriter, pianist, and founder of the rock band, Procol Harum. Brooker was awarded the Member of the Order of the British Empire in the Queen's Birthday Honours on June 14, 2003 in recognition of his charitable services. Brooker grew up in the seaside resort of Southend-on-Sea, Essex, England, as did most of the other founding members of Procol Harum.

Brooker grew up in the seaside resort of Southend-on-Sea, Essex, England, as did most of the other founding members of Procol Harum.

He founded The Paramounts in 1962 with his guitarist friend Robin Trower. The band gained respect within the burgeoning 1960s British R 'n' B scene, which yielded The Beatles, The Animals, The Spencer Davis Group, The Rolling Stones, and many others. The Stones, in particular, were Paramounts fans, giving them guest billing on several memorable shows in the early 1960s.

In 1966, Brooker founded Procol Harum. "A Whiter Shade of Pale" is the worldwide hit that Procol Harum is best known for, but Brooker's melancholy vocals and emotive, eclectic piano playing were a key part of Procol's musical mix for the entire course of the band's career. In the early years Brooker, Hammond organist Matthew Fisher, and Trower were the guiding musical forces behind the band, but after disparities in style became too much and Fisher and Trower left, Brooker was the clear leader until the band broke up in 1977.

A new incarnation of the Procol Harum, led by Brooker, and including Fisher for most of the tours from 1991 through 2003, has continued touring the world. Brooker also toured with Ringo Starr's All-Starr Band in 1997 and 1999, and he was also a member of Bill Wyman's Rhythm Kings for several years, appearing on three of their albums and touring with the band.

In November 2002 he was among musicians and singers participating in the George Harrison tribute concert, Concert for George, at which he took vocals on their version of "Old Brown Shoe".

Lead Me To The Water (Bonus Track Edition)

No More Fear Of Flying

Echoes In The Night

Lead Me To The Water