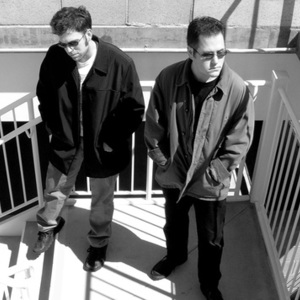 Taken from Ganymede's MySpace (http://myspace.com/ganymedemusic): Ganymede's innovative electronic pop music is a sophisticated hybrid of vintage analog synths and the latest in modern production technology. With one foot planted firmly in the revered sound of synth pioneers like Kraftwerk and Giorgio Moroder and one foot in the shimmering electronic future, Ganymede has blazed its own path through the jungle of indie electronica.

Patrick Runkle and David Friede have proven themselves as producers, with the pulsating beats of songs like ?Neon Rain? and ?Hong Kong,? as songwriters, with the clever innovation of tracks like ?This Wasn't the First Time? and ?Legacy,? and as performers during the Electroclash heyday, with shows at Synthcon in Hollywood, at Electroluxe (San Diego) and at Satellite and Transmission (L.A.). Outburn Magazine called the band ?bright electro pop stars that have an even brighter future.? Influential Belgian music magazine Side-Line said this about "Space and Time," Ganymede's third album: ?Where the duo score so highly is in their knack of turning out instantly memorable tunes and this is much in evidence throughout here ... if you're looking for top-class analog synthpop this is where it's at.? Ganymede's blockbuster fourth album, "Operation Ganymede," is scheduled for release in 2007.