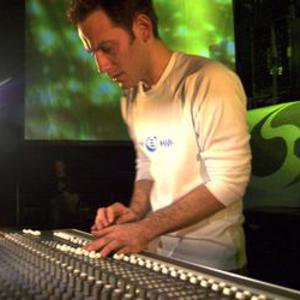 (1) Galaxy is one of the projects by Boris Blenn. Unlike the Electric Universe, Galaxy is much more floating, slower and ambient style. Boris Blenn has released three albums under the name of Galaxy: Angel (1998), Solar Synthesis (2000) and Science Of Ecstasy (2004).

(2) Galaxy has been together for over two years. Galaxy is Emma McKenna on guitar and vocals, a riot grrl patriot and self-taught musician; Maya Postepski, a classically trained percussionist of 12 years; and Katie Stelmanis, also on guitar and vocals, a classically trianed singer, piano player, and experimental composer. These three women combine their unique backgrounds to create a hard, skin-splitting, rock n roll sound that begs to be heard. To date they have played almost every venue in Toronto, opening for live acts such as the Organ, Gentleman Reg, and Tracy and the Plastics. They have toured much of Southern Ontario, and performed in local festivals like Ladyfest Toronto and Ladyfest Ottawa. Currently they are recording their first official EP, to be released in the fall.

(3) Galaxy is an obscure five-piece Swiss band that disappeared after their debut "Nature's Clear Well", released in 1978 and that is similar in style to bands like Yes and Genesis.

(4) Pretty late in the game but rooted firmly in the late 1960s sound, with female vocals and hippierock moves mixed with heavy riffing and spacerock ambitions. Has some pretty good tracks, the reissues might be worth checking out. The 1989 counterfeit is close, but can be recognized via the fine print on the back cover which is blurry, and the cover is of thinner stock than originals; furthermore in the dead wax the figure '7' is written the European way, i e crossed.
--
1970s spacerock rarity by a heavily female band (the keyboardist is named ?Space Mama Geiger"!) It's the only album I know to have a drum solo by a woman... but it's still a drum solo. The songs are long and somewhat tedious, but there are some neat ideas here and overall it's a pretty enjoyable record for something so uneven. The band recorded two later unreleased LPs in 1976 and 1984, which are reissued in the Akarma set "Very 1st Stone" (LP and CD, Italy). These LPs are more in a traditional blues rock style and are less interesting.

(5) Galaxy was formed 1992 to continue the (already relatively strong) Senegalese mbalax tradition in Finland. Galaxy has released three cassettes in Senegal. In March 1997 Galaxy started recording its first CD in Finland. The CD titled Nobeel (Global Music Centre GMCD 9705) was released in May 1997, receiving many acclaiming critics. Galaxy's second cd L'Ins?curit? (Global Music Centre GMCD 0308) was released in 2003 and was produced by a Finnish jazz musician Eero Koivistoinen. In 2005 Galaxy were rewarded with the highly regarded Finland Prize.

(6) Galaxy was a pop duo from G?vle, Sweden, consisting of the two teenagers Thomas Jackson and J?ns Ahl?n. Eventually, they dropped the name and started playing as Cikada in 1993.

The Breath of Life