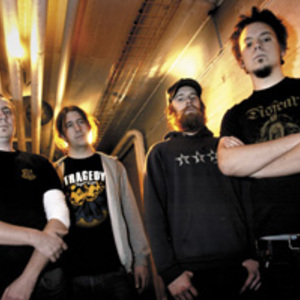 Though they seem unheard of to the general populace, G?vle, Sweden's GADGET has roots that trace back to 1997. At that time, GADGET existed as the grinding alter-ego of a metal-core band whose members, including GADGET progenitor William Blackmon, simply switched instruments. This early version of GADGET existed long enough to record one demo and then disappear at the end of '98. In late '99, Blackmon joined local death metal troupe WITHERED BEAUTY and another local grind outfit in his spare time.

In late '99, Blackmon joined local death metal troupe WITHERED BEAUTY and another local grind outfit in his spare time. The compromises of both were unfulfilling so Blackmon decided to take things back to the proverbial drawing board and, as he recounts, "start making music for myself, by myself and with myself."

The second coming of GADGET was starting to take place. "I just kept the name since I came up with it." Blackmon says. He continues, "GADGET was planned to be a solo project. I was fed up with playing in bands without substance. I was fed up with being in just one of those other projects that disappear after a couple of months. I was fed up with the shallow lyrics and the focus on 'cool' instead of 'honest' or even 'good.' I wanted, but for once, to play grind/metal with something more to offer than just 'cool' music."

Blackmon set to work piecing music together in his rehearsal space with his guitar rig, drum set, and trusty eight-track recorder. Soon enough though he decided this approach wasn't working. "I got fed up with not being able to try out riffs and beats without the use of my 8-track. It got so lonely in the rehearsal... sitting there drumming and riffing and writing all by myself with no ability to get immediate feedback on what I was constructing. So I decided that if I could find some people with a similar attitude towards the art of grinding, perhaps it would benefit the situation."

Enter guitarist Rikard Olsson who played in one of G?vle's crustiest bands; SHITSTORM! The duo tried out several drummers and bass players but couldn't find anyone who fit and thus remained a rehearsal space two-piece. Blackmon recounts, "This way we could do everything except play live, and if that was the price for the music to turn out as we wanted it, so be it." For their writing sessions Blackmon manned the drums.

In March 2000, William and Rikard put their first material to the test. William recorded a ten song session and made a small run of tapes to hand out amongst friends. GADGET soon added vocalist Emil Englund and entered Studio Bandylimpa to record what became their second promo tape, this one a six song affair.

Shortly thereafter, the band was asked to contribute to a split 7? with EXHUMED on Relapse so they went back to Studio Bandylimpa in February 2001 to record. The recording turned out so well that it laid the groundwork of what would turn into a long-term relationship with Relapse.

GADGET recorded again in July (at Studio Blueroom) for what would become their contribution to the infamous Polar Grinder and Swedish Assault compilations (on Relapse and Putrid Filth Conspiracy respectively). This slew of splits and compilations staggered out over the better part of 2002 while the band wrote new material. Rikard also joined crust sensations DISKONTO on bass.

The band signed with Relapse in spring 2003 and entered Gothenberg's Phlat Planet Studios with producer Frederik Rheinedahl (BURST, PASSENGER, DIMENSION ZERO, etc.) in July to record their debut Relapse full-length, ?Remote.' 'Remote' was released on February 3rd delivering Swedish grindcore from a band fast on the rise and with something to prove.