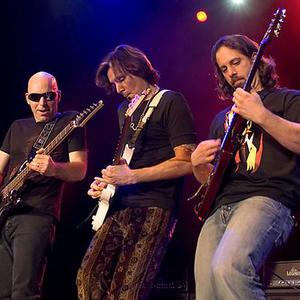 There are three official live releases of G3:

The 2007 G3 tour line-up lacked Steve Vai (because of his own solo World Tour), and instead consisted of Joe Satriani, Paul Gilbert, and John Petrucci.

G3 is also the name of an, already disbanded, Peruvian hardcore punk band.

G3 is also a Christian/Gospel group

Rockin' In The Free World CD2

Rockin' In The Free World CD1