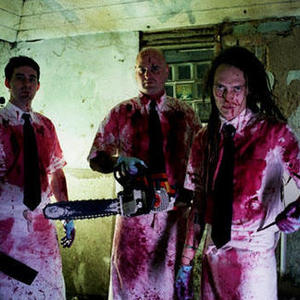 Fuck...I'm Dead started in May 2000, with Tom Raetz on bass, Dave Hill on guitar and drum programming and Jay Jones on vocals. In July 2000, Fuck...I'm Dead recorded and released a self-titled demo tape with 8 tracks, and an extremely poor recording, but somehow managed to capture the interest of Germany's Sanitys Dawn which lead to the release of the Sanitys Dawn/Fuck...I'm Dead split 7" in early 2001.

With some extreme fret board gymnastics the Bring on the Dead album was written, recorded and released late 2001. Following this release was the Fuck...I'm Dead/Engorged split CD in 2002. During all this, Fuck...I'm Dead had been playing shows constantly around Australia and began working on a new album which was initially intended for a 2007 release and a split 3" with Vulgar Pigeons and a split 7" with Rompeprop. They have also recently released a live album in CD/DVD format.

Bring On The Dead