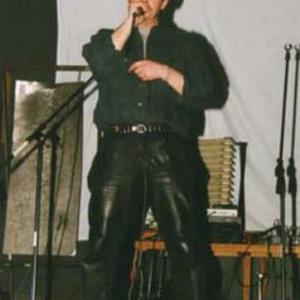 Those who have discovered ?Deutsch Nepal? will scarcely afford to forget it due to emphatic charisma of Peter Andersson aka Lina Baby Doll. Actually, only few people are aware that Lina Baby Doll has the incarnation of Zyklon B Doll and ?Deutsch Nepal? ? his Siamese twin that spread as a cancer from the Deutsch Nepal body. It is much weirder, it leaves his sign in the world much rarer and almost never or perhaps never performed in public. The name of this twin ? ?Frozen Faces?. It is the second ?solo? project of Peter Andersson.

However, father Peter stated by himself that developing of ?Deutsch Nepal? forced the creation of tracks sounding somehow differently, much harder in the sense of sound aesthetics and launched the necessity to entitle them in different names. Thus, the ?Frozen Faces? was born ? the harsher, more abrasive brother of ?Deutsch Nepal?. Still upon hearing the hard ?industrial? loops and feeling the sense of dark alcoholic delirium, there is no need to query about the creator of this project.

Broken Sounds... Of A Dying Culture