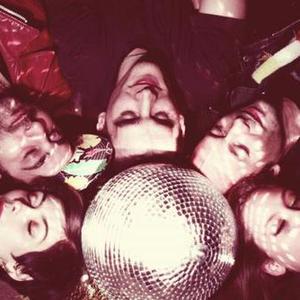 1) Friends were formed in 1986 by singer/guitarist/songwriter William Jones, in Stockton-on-Tees, Cleveland, UK. Drummer and percussionist Martin Parker joined in 1992 and these two form the nucleus of the London-based band today. Friends have released nine albums and six singles on the Summerhouse label, all of which are still available. Their latest album, Spangleland, was released in May 2007.

Stylistically the music is classic English romantic pop, with lyrics that range from incurable optimism to the darkest miserablism. Influences include Teardrop Explodes and The Chameleons, and 70s acoustic music such as Nick Drake and Renaissance. Their new album sees the band stretching its stylistic range, with a couple more tilts at the perfect pop classic, and some lengthier epics that hover between immediate popness and downright weirdness.

Friends completely disown any television programmes of the same name.

2) Friends are a pop punk/emo band from Nashville, TN featuring members of Dependency. The band's debut EP, Better Off Alone, is out on Blood & Ink Records. http://www.facebook.com/friendjams

3) ??????? is a seiyuu group that includes Akesaka Satomi, MAKO, Kobayashi Yu, Shimoda Asami, Asumi Kana, and Honda Yohko. All 6 voice characters in the TV anime Kyo no Go no Ni (Today in Class 5-2). They sing the opening theme to the series.

4) Friends is a Swedish pop group that represented Sweden in the Eurovision Song Contest in 2001. They split up in 2004 when two of the members started the group Nina & Kim.

5) Friends is a rock band from Adelaide, Australia

6) Friends is a math rock band from Fort Lauderdale, Florida

7) Friends was a project of Peter Howell and John Ferdinando, who also released albums as Agincourt and Ithaca. Friends made one album, Fragile, in 1972. Ruth Cubbin sang the female vocals.

8) Friends (2010-present) is a Brooklyn-based independent that blends a wide variety of sounds into dance-ready indie pop music.

9) Friends was a Jazz-Rock group featuring John Abercrombie, Clint Houston, Jeff Williams and Marc Cohen. They released only one album together in 1973 called 'Friends'.