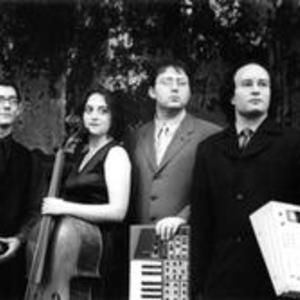 The Freight Elevator Quartet (FEQ) were a music performance group specializing in improvised electronic music active in and around New York City. They performed and recorded continuously from 1996 to 2003, and collaborated extensively with experimental music artists such as DJ Spooky and Elliott Sharp, and avant-garde videographer Mark McNamara. In addition to using electronic instruments (originally analog synthesizers and drum machines, later laptops and samplers), they also sported fairly unusual acoustic instrumentation, having a cellist and a didjeridoo player in their regular line-up.

In addition to using electronic instruments (originally analog synthesizers and drum machines, later laptops and samplers), they also sported fairly unusual acoustic instrumentation, having a cellist and a didjeridoo player in their regular line-up. FEQ began as a house band for a series of warehouse parties on 125th Street in New York City, famously playing their first gig in a freight elevator. Their eponymous first record, released in 1997, was completely made of live recordings from shows played in their first year of performing, featuring the lineup of Stephen Krieger on drum machine, Rachael Finn on amplified cello, Paul Feuer on didjeridoo, and R. Luke DuBois on a Buchla analog synthesizer. Their second and subsequent records saw the gradual expansion of their instrumentation (starting with Feuer doubling on keyboards and DuBois playing guitars) until by the time of their break-up in 2003 the entire band was effectively made of multi-instrumentalists.

As a conceptual project the Freight Elevator Quartet combined influences from experimental music and conceptual art as well as a strong interest in musical Futurism (played out in their joint recording with DJ Spooky, File Under Futurism). In their liner notes, they referred to themselves as a group of musicians in the present imagining the past imaging the future, a concept akin to the literary conceit of Steampunk; by combining cutting-edge (digital samplers and computers), obsolescent solid state (analog synthesizers), classical 18th Century (cello), and aboriginal (didjeridoo) instrumentation, the group deliberately confused the temporal reference point of their music. Stylistically FEQ was known to appropriate whatever genres they felt like, working to fuse different styles of breakbeat, drum and bass, downtempo, digital hardcore, rock, hip hop, classical, and, most conspicuously, academic computer music. Most of their recordings are culled from composite takes of live performances, though they have released two studio albums as well, both of which feature songs with guest vocalists, including Lorraine Lelis of the band Mahogany and Spezialmaterial recording artist Josh Druckman (as JMD).

The Freight Elevator Quartet were for many years the unofficial ensemble-in-residence of the Computer Music Center, Columbia University.