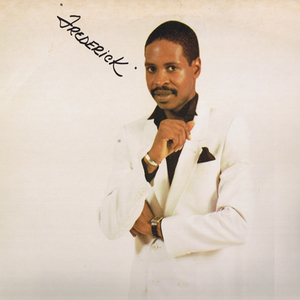 Prior to the Dazz Band, Levert, and Bone Thugs-N-Harmony's chart assaults, Frederick's "Gentle (Calling Your Name)" held the distinction of being the most popular R&B/soul recording ever cut in the northeast Ohio area, reaching number 40 on the pop charts in 1985. Cleveland natives Edwin Starr, Bobby Womack, the Hesitations, and the O'Jays recorded bigger hits, but in other places. Frederick cut his recordings in a tiny, homemade studio called Time Traxx, located on 23rd and Superior in the downtown Cleveland area.

Frederick Millard Davis was born on April 7, 1957, in Cleveland, OH; he's the fifth of eight siblings, is divorced, and has two daughters: Monica and Dana. Growing up, his singing inspirations were Al Jarreau, Donny Hathaway, George Benson, and Bobby Caldwell. While attending John Hay High School, he joined the Soul Reactions, a popular local band that disbanded when Frederick enlisted in the Navy. His hobbies consisted of football, basketball, music, videos, and boxing. As a lightweight, Frederick boxed in the local Golden Gloves in 1975, held in Cleveland's old Navy Park. He enlisted in the service shortly thereafter and continued boxing in the Navy, training in 1976 with the Navy Olympic Boxing Team.

He resurrected his singing career upon discharge and became a regular at gong and talent shows held at the Sir Rah House and the Native Son Lounge, winning first prize many times. A witness to Frederick's talent recommended him to Le Ray Ruffin, a fledging record producer and owner of Time Traxx Productions. Frederick had cut a demo of "Gentle" when local DJs Jeffery Charles and Lynn Tolliver visited Time Traxx, heard the tape, and convinced Ruffin to let them take it with them for a later listen. To their amazement, Charles played the demo on his number one-rated quiet storm program, For Lovers Only, on WZAK that evening. The phone lines went crazy that evening and the following day. People were trekking to record stores trying to buy the romantic ballad. Ruffin convinced Frederick to sign a one-year contract with Time Traxx and got Heat Records, located in Akron, OH, to release and distribute "Gentle." Problems beset the arrangement from the beginning; another voice was prominent on the recording, that of the late Janice Dowlen. Dowlen had never signed a contract with Time Traxx. Instead, the owner of Heat Records, James McCants, had convinced her to signed a long-term exclusive contract with his label. Frederick never signed anything with Heat, and would only commit to a one-year deal with Time Traxx. "Gentle" might have sold a million copies had Heat been able to fill the demand for the record. While on tour promoting the record and performing shows, Frederick went to many cities where record store owners complained about not being able to get copies. In addition, because Frederick never signed a contract with Heat, McCants wouldn't let Dowlen tour with Frederick. Frederick can only remember singing live with Dowlen once or twice. A local singer, Evelyn Wright, toured with him instead, while McCants brazenly sent Dowlen on tour to promote "Gentle" with an Akron group called Johnston Brown. Heat even released a single with Dowlen and Johnston Brown, who many thought was a solo male singer.


Once, on the same night Frederick appeared at the Front Row Theater in Highland Hts., OH, with Ashford & Simpson, Dowlen and Johnston Brown were performing "Gentle" at the Jack the Rapper event in Atlanta, GA. Wright didn't perform with Frederick on the show because Ashford & Simpson demanded that no other male/female duet perform on their show; Frederick was forced to perform "Gentle" solo to the dismay of everyone attending. Heat rushed an album out, Frederick, and released two more singles: "Games" and "Somebody Won't Sleep Tonight." "Games" did well in some areas, and even received some spins in England courtesy of DJ Angie Dee. When Frederick's contract with Time Traxx expired, he didn't renew, choosing instead to venture out on his own with little success. He has released three 12" recordings: "Your the Best (That Ever Happened)," "That Kind of Lady," and "Shoulder to Cry On." He also recorded a gospel song, "Find Your Way Home," with Janice Dowlen in 1991, shortly before she died of a heart attack.

During the '90s, Frederick sang and played percussion with Eugene Ross & Company, a popular local group. He also had his own band, 1SU (1 Step Up). Other projects included working with two female singers, writing a book detailing his experience in music, and even dabbling in film production. Frederick has worked at the Veterans Hospital in Cleveland, OH.

Secret Prayers In The Dark