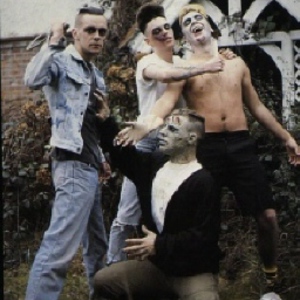 The Frantic Flintstones first incarnation was in 1986, in fact Chuck even remembers the first gig. It was at Reading University in October of that year. Previous to that Chuck had been fronting a few other bands that sort of fizzled out, notably What's This Fish? and Mute. The fish band even got some local press where Chuck is pictured with some very square 80s looking chaps while he looks all psycho and wearing a huge pair of glasses, even off the wall in those days.

The first proper line-up as far as Chuck can remember was Ric on guitar, Clive on bass and drummer Toby "Jug" Griffin who went on to beat the skins for The Coffin Nails and later The Meteors.

The first vinyl offerings came a year later when Raucous Records released the now classic Bedrock EP. By this time the line-up had changed, Nodger was playing guitar and wearing schoolboy shorts, Andy was hitting the drums and Gaz Day slapping the bass. Chuck even managed to recall that first session. Andy kept fucking up the drum part, and the drums are always recorded first, it was a nightmare, but also hazy due to untold booze and speed?

The single sold well and was soon followed by another on the same label. Not long after their debut album was released on Nervous Records. It was called, wait for it, Nightmare On Nervous though unimaginatively titled it sold by the bucket load and even bothered the Indie Charts. Gigs followed, along with plenty of money to spend on drugs and drink for the all-important party that always followed and often well preceded a Flintstones Gig.

Then it almost went horribly wrong. Chuck suffered a heart attack and need some major surgery, a blow that would have put most people off many of the things he enjoyed, see above. But not our Chuck. Not long after he was back at it necking vodka from a bottle, smoking tabs and doing dabs, not to mention recording some more tunes. In the period between Nightmare On Nervous and the next album Rockin' Out Nodger left to be in ACDC full time, well that was the plan but it seems not to have gone quite as expected, so Jon "Pug" Peet was brought in. He was a mate of Gaz's from a previous band The Mysterons. Not only could he play guitar really well but he could also do it blind drunk and falling into the drum kit. Perfect for the FF. Rockin' Out on Link Records is now regarded as one of THE classic Psychobilly albums, the redone version of "What The Hell" and one of the other all time FF favourites "Rocking Bones" being many peoples highlight.

In the years that followed there were many great albums on Link, loads of mental gigs not to mention line-up changes, far too many to go into detail with here but here's a bit of a recap, Chuck had a short holiday at the expense of HRH Queen Elizabeth the Second where he spent his time in a big house in Oxford getting of his face with some other blokes. Gaz left to concentrate on his other band The Nitros and eventually joined Morrissey. He came and went a few times after, last playing with the FF on their Jamboree album.

Gasty came, played on some Link albums and went again. Guana Bat Jonny Bowler slapped on a few sessions and even Graeme "Captain Drugbuster" Grant had a go on bass, but that was short lived, apparently the "session" at the session was a bit too hardcore for the Captain and left the line-up due to health reasons. Other bass players came and went, if I mentioned them all it would read like one of those bible passages where people are "begat". On skins, Rich Taylor and Clem from Caterham followed Andy before The Rockinreject took over and still whacks the beat to this day. Jon Pug was another mainstay of the band, as the rhythm section came and went, Jon was always there by Chucks side, sometimes sitting down, often wobbling, no lets be honest, always wobbling, but always coming up with those Rockin' licks.

The 1993 release Jamboree was the start of a relationship with Anagram Records that continues to this day with their reissue program making sure all that old stuff is still available. In 1994 The FF recorded Enjoy Yourself for Anagram, then Chuck moved to Germany and was married a year later. Around this time Jon Pug found it harder and harder to do gigs and was temporarily replaced by Long Tall Texan Douggie (who vowed never again would he do a tour where he was afraid to fall asleep) and Alan Wilson on various occasions for live gigs. Eventually Jon had to leave the band but still on good terms and did play a couple of live gigs in 2003.

Through the relatively quiet years of the late 1990s Chuck continued to record and release good quality stuff in a partnership/friendship with Alan Wilson and even did a solo stint or two live. The next album of FF originals with a permanent band hit the shops in 2003, entitled Champagne For All. It was a full on kick in the bollocks for anyone who said the FF were has beens, return to form. Rockinreject on Drums, Funthomas on incredible slapping bass and Go Go Gomez on Guitar with insane, as you would expect vocals by Chuckers. Now the Psychobilly world has sat up and taken notice, offers of gigs have flooded in and been accepted from the World over, though Chuck is still praying for that one from Columbia!

Of course there has to have been a line-up change, Go Go Gomez has Gone Gone Gone replaced by BubbleDucky and Funthomas by Cloey but evolution was always the FF way.

The future is going to see the Tripabilly Whizz Kids rockin' harder than ever before. Hip Hip Yeah!!

Freaked Out & Psyched Out

Too Sweet To Die