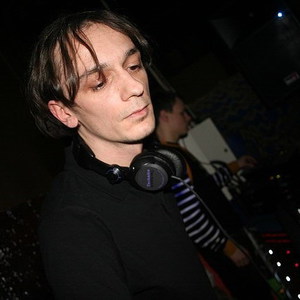 Since 1990, Frank Martiniq has devoted his life to electronic music, both as producer - turning all the little buttons around - and as DJ - carrying heavy vinyl cases. In 1995, the first milestone was reached with his vinyl release on Acid Orange. At that time, his sound was rough, fast, furious and uncompromisingly banging. Today, he is caressing our synapses in a very sophisticated and subtle way. Well, what else can he do with all his equipment treasures which have to be well-kept and maintained? And with a bottle of furniture polish in your hands, it is almost impossible to bang around.

Yet the influences of Detroit and Chicago are noticeable on all his releases. No doubt: He is a real American.

In the meantime (1998-2000), he moved from the middle of Germany up in the North, and turned from the straight bass drum towards a new sound aesthetic that reminds of good old Warp School. An intermezzo that was captured on his "PMF Acht" release which has never lost its charme. And then, he launched his career on Boxer: "Schwingkomplex" was among the top albums in the worldwide ranking, not to mention his 12" "Adriano" which had a terrific start.

In the beginning of 2003, his music was more experimental; but after he moved to Cologne, clubbing was at the top on Frank's "To do" list. He regained fun in straight productions which resulted in a vast output and Frank became the hottest ass of his booking agencies, in particular thanks to his "Late Night Tools" series and his "Wizkaz" release. Yesterday Sevilla, tomorrow Zurich, next week London and Paris. Jet-set Franky on tour with a straight bass drum and ludicrous funk!

Who'd already had the pleasure to listening to his tunes might get the impression that his sets include tracks that normally would not fit together. Devil only knows how he does it, but with a somewhat secret force, he manages to do the impossible, time and again, and you will find yourself happy and wondering into the next morning...