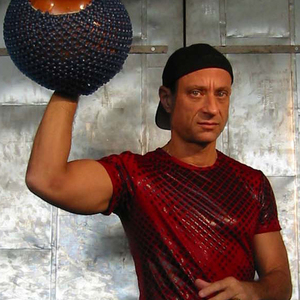 Frank Col?n ? Force Majeure Frank Col?n is a specialist in Latin-Caribbean, Brazilian and Asian percussion instruments including congas, bongos, timbales, bata drums, shekere, cuica, berimbau, and tabla drums, among others. Born in Georgetown, Washington, D.C, he grew up in Puerto Rico from between the ages of 7 to 18 years old. He started his musical journey at a very early age, studying piano with the Figueroa family, Puerto Rico's internationally acclaimed classical music family.

In high school he actively participated in various sports (winning regional and national medals in track and basketball!) and theatrical arts.

Graduating high school, he went back to Washington, D.C. to study Political Science at The American University. During that time, he did extensive personal research in the field of ethnomusicology while also playing with local bands.

Traveling to Rio de Janeiro, Frank became an instant hot commodity! On a record session with the well-known Brazilian vocal band, MPB4, he introduced the Afro-Caribbean shekere into Brazilian music. Since then, this instrument has become essential to the instrumental arsenal of every modern contemporary percussionist!

During three years in Milton Nascimento's band, Frank toured all over Europe and Brazil, and recorded on many albums. At the Montreaux Music Festival in Switzerland, he recorded two ?Live? masterpieces, one with Wagner Tizo's band and the other with Milton Nascimento's band. In Rio de Janeiro, Frank also performed and/or recorded with Gilberto Gil, Jo?o Bosco, Chico Buarque de Holanda, Cesar Camargo Mariano, Ney Matogrosso, Elba Ramalho, Marina, RPM and Robertinho Silva. Frank also took part in the 100-year anniversary celebration of the Brazilian classical composer, Heitor Villa Lobos, touring all of the state capitals in Brazil.

Upon returning to the States, Frank was immediately enlisted by The Manhattan Transfer band. They subsequently toured and performed together all over the world for 12 years, during which time he recorded three CDs with them. As a sideman with the Manhattan Transfer, he collaborated with his creative sound for a few of their Grammy awards and was voted as one of the top three ?Most Influential Percussionist of the Year? by the readers of Modern Drummer Magazine!

Lately, Frank has been touring and recording with pop singer Thalia, pianist Michael Wolff, and tablaist Samir Chatterjee. He is also performing with his own band! He is featured on the Manhattan Transfer's latest CD release: ?Vibrate?! On request from the US State Dept. and the Kennedy Center for the Performing Arts, Frank has participated in the ?Jazz Ambassadors? program, touring through Russia, Uzbekistan, Kyrgyztan, Azerbaijan, Turkmenistan, Georgia, Ukraine and Moldova. He has also been a ?special guest? of the Rio-Havana-New York music festival in Moscow every year since the festival's inception.

Frank has also performed extensively on film soundtracks written and produced by composer/violinist Michael Galasso. He also appears in the musical documentary movie ?Calle 54?, directed by Oscar-winner Fernando Trueba. His two albums as a leader are: ?Frank Col?n -Live at Vartanjazz? and ?Latin Wonder?, both of which have received very good critical reviews. He is also featured as principal soloist in a DVD with the Kremlin Chamber Orchestra from Moscow, in a symphony commissioned for him entitled ?Adoracion al Ritmo.?

Frank is now associated to the Music Solution (musicsolution.com.br) Production Corp. in Rio de Janeiro, Brazil. Together with his partner, producer/musician Daniel Figueiredo (danielfigeiredo.com.br), he is actively producing and recording for international music projects as well as for Brazilian TV.

Besides show performances, Frank has been conducting percussion clinics and workshops all over the world. His workshops not only explain and demonstrate the technical aspects of drumming but also emphasize the possibilities of extending communication and cultural exchange between all people through the universal language of music.

More information can be obtained at the following web site: www.frankcolon.com.