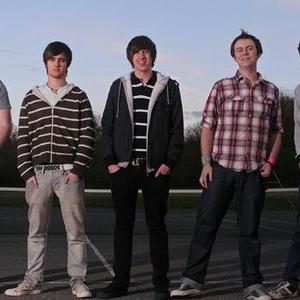 One is a energy/rock band from St. Louis, MO
http://www.myspace.com/adelaidestl

One is a post-rock band from Portland, OR, now known as Small Sails
http://www.last.fm/music/Small+Sails

One is a deathcore band from Columbia, TN
http://www.myspace.com/adelaidetn

One is a post/alternative band from Buffalo, NY

One is an ambient/pop/rock band from South East London.
http://www.myspace.com/adelaideuk

Adelaide is a canvas of melody & rhythm that depicts the melding of heart-break and unwavering determination to break the chains of life in a 21st century run-down industrial rust belt town/frozen tundra, laced with hope, love and faith. The songs written on the bands debut release Overtired & Ill Prepared, were written in the dark basement of an abandoned house without heat in the coldest winter months of 2003. It was recorded in the heart of the old, windowless Heinz pickle factory under flickering fluorescent lights. The bands music reflects the Hope that carries the five through the trials of the human experience, and seeks to resonate with the fragility of its listeners amidst the world's expectations to be strong and self-sufficient.

Hailing from Buffalo, NY, Adelaide is full of promise and anticipation for the music lover. Their live performance is gripping and implies to those watching that they should expect more from bands that they have paid hard-earned money to see. They demand a captive audience. The band displays an authentic interest in their listeners that brings a refreshing glance of the humanity and humility in a hard working musical artist who truly realizes that without the fans, there is no-one to play for. They are passionate and driven. They are a relevant musical voice in the noise of todays impersonal faux-teenage angst anthems and recycled middle-school love poem ballads. They seek to restore faith to those who will receive it, and to love those who are unloved. The future of this band will be nothing short of resilient. To quote the Reading Rainbow: dont take my word for it Listen for yourself.

Adelaide from South East London, UK. 'Adelaide' is a relatively new concept.
The band have been running under the name 'AntiKid' for a fair few years but after undergoing a renewal in both genre and line-up, the band felt it was best to change their name.
Adelaide is a mix of gripping distortion laced with crispy, mellow ambience and the type of beat that begs the nod of the head.


Adelaide (Deathmetal band) myspace.com/adelaidetn
Adelaide is a dedicated Christian death metal band hailing from Middle Tennessee. Formed by vocalist/songwriter Sam Schneider and drummer Tyler Matyskiela in 2007, Adelaide hit the extreme metal scene hard and fast, playing no less than 150+ shows a year since their formation. Adelaide separates themselves from their local peers by maintaining a more-than-impressive schedule of live dates branching out of their hometowns and advancing into Tennessee's surrounding states, sometimes traveling 6 hours to play single shows. Adelaide's brand of heavier than lead guitar riffs, creative, stunning drumming, guttural vocals, and persistent promotion has earned them a huge following not only in their area but across the country. Adelaide has shared the stage with such acts as Mychildren Mybride, Horse the Band, Becoming the Archetype, Veil of Maya, Impending Doom and Oceano, amongst others. In 2008, they recorded their self-titled demo with Brandon Cagle (ex-Whitechapel) at Atomic Audio, following it up the next year with a 5 song E.P. called ?Pergamum? which was recorded at 456 recordings with Brian Hood (ex-Mychildren, Mybride.) Adelaide is now an unstoppable 5 piece that is seeking bigger and better things, such as non-stop touring, and a full length debut by the end of this year.

Number One With A Bullet