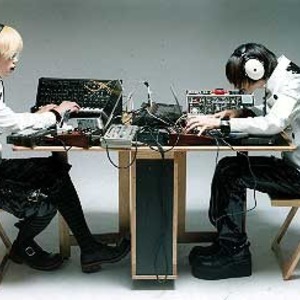 FLOPPY is a side-project formed by two members, metronome's Sharaku Kobayashi on vocals and technology, and Shinjuku Gewalt's Hiromu Toda on synthesizer and technology. Also from metronome is Fukuda Fukusuke as FLOPPY's support guitarist, who has also written some for them as well. They first debuted in Tokyo at club vuenos on August 8, 2004 and released their first single Chip Trick. This live-only single also contained the cover-song Pike originally by Hikashuu.

A few months later they were able to release their first album, FLOPPY, at their two lives in December earlier before it was officially released in January 2005.

The year of 2005 had a few interesting lives for FLOPPY, including a secret live in March. However, it wasn't until September that the band was able to release their next single, FLOPPY no suteki, a live-only release, and which also ended up being sold out. The end of the year was a huge event for the unit as they had their first one-man live on December 24 and simultaneously sold a new single with handmade covers.

The release of their next mini-album, Sine Wave Orchestra, was a very exciting time, as along with the mini-album came a few in-store events and lives. The mini-album was first released on their May 20, 2006 live and it was then later officially released on May 31. Next they were on a cover album, The Very Best Covers of Uchouten, covering the song Pinocchio which was originally by the 80's progressive indie band Uchouten.

For the next year, there was not much band activity for FLOPPY except for a live almost every other month. In February of 2007, Sharaku modeled in the ?Gothic and Lolita Bible 24.? He represented FLOPPY wearing a theme that he called near future cyber boy. A few months later, the band released a rare in-store maxi-single titled low-bit disco, which quickly sold out and was followed by their first one-man tour Mach Midi Rider. The duo also started to branch out in 2008 by doing video game music. They did two songs for the game ?IDOLM@STER? and a song for the XBOX360 shooter game ?otomedius G.?

2009 is looking busy for the duo as they started off the year with a long one-man live called TOKYO GAMESOUND SHOW at the end of January. In the spring, they released a new single called everything which was, yet again, sold only at their April 18th live but was later available for download as a digital single. In October, they released their first full album Deus ex machine. The album included their first pv for their single everything. Not slowing down, the duo is ready to release their next full-length album, PROTOSCIENCE on March 17th, 2010.

Recently, FLOPPY has announced a lot of their music will be more readily available to overseas fans through JapanFiles.com, an overseas Japanese music download site. With FLOPPY's music becoming more accessible, their future is looking hopeful.