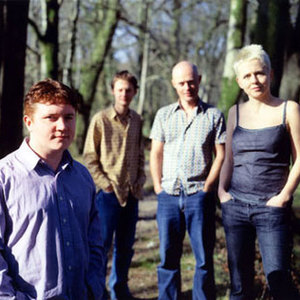 Flook is an Anglo-Irish band playing traditional-style instrumental music, although much is penned by the band themselves. Their music is typified by extremely fast, sometimes percussive, flute and whistle atop complex guitar and bodhr?n rhythms. The band was formed in 1995 with three flute-playing friends Sarah Allen, Brian Finnegan and Michael McGoldrick, (who left in 1997 to join Capercaillie). The band was briefly known as Three Nations Flutes. In December 2008, the band sent a message to fans via their website announcing their disbanding.

They played one final gig in Belfast on 16 Aug 2009 at the end of the Tall Ships festival. This is apparently their thank you and goodbye!

Band members
* Sarah Allen plays flute, alto flute and accordion. She has also been a member of the Barely Works, Bigjig and The Happy End Big Band.
* Brian Finnegan plays wooden flutes and tin whistles. He has been a member of Upstairs in a Tent (originally Gan Ainm) and Maalstroom.
* Ed Boyd plays guitars and bouzouki. He is a former member of Red Ciel.
* John Joe Kelly plays bodhr?n and mandolin. He has also worked with Altan and Paul Brady and is much in demand as a session musician.