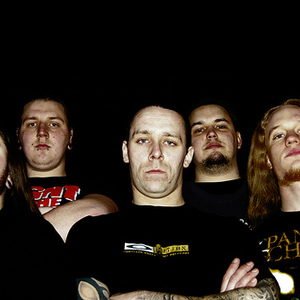 There is more than one artist with name: 1.) A Brutal Death Metal band based in London, England. Formed in 2003, they have shared the stage with many well established acts such as - Behemoth, Vital Remains, Skinless, Immolation, Misery Index, Enslaved, Unleashed, Inveracity, Despondancy, Visceral Bleeding, Insidious Decrepancy & Many more... :Spawned in South London England late 2003 Fleshrot play an original mix of brutal and old school death metal styles, with a devastating live presence and technical ability, Fleshrot have evolved into an unstoppable force within the UK Metal Scene.

With several line up changes their sound has moved towards a more mature and technical approach to death metal, Early releases such as Gore-a-Holic and Decomposition of Humanity attracted attention from several Record Labels resulting in Fleshrots signing to Deepsend Records.
Produced by Nick Hemmingway of Phillia Stuidos Traumatic Reconfiguration is Fleshrots Debut Full length CD and is a solid representation of their brutal and orginal sound.
This is just the beginning, Fleshrot will continue to devastate stages worldwide and will leave nothing in their wake...