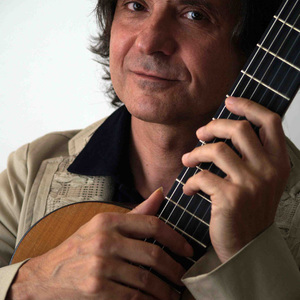 Considered by critics as one of the most interesting European guitarists of the international scene, Flavio Cucchi has given hundreds of recitals in America, Europe, Asia amd Australia in addition to participating in radio and TV shows for the some of the biggest world-wide broadcasting corporations (the BBC, RAI, ZDF, Bayerischer Rundfunk, Televisa Mexico, Television Corporation of Singapore, Radio Praga, and others).

He won first prize at the National Competition of Contemporary music, (Chairman Goffredo Petrassi) and second prize at international competitions in Gargnano and Alessandria Specialist in contemporary muic, Flavio is one of the first Italian guitarists to popularize Leo Brouwer's compositions.
He is also very active in the domain of chamber music, and has played the world premiere of Sestina d'Autunno by Petrassi and many modern masterpieces as Boulez ?Marteau sains maitre? (at the Scala di Milano), Henze's ?Cimarron? etc.. He has also participated in several operas by Bussotti, Berio etc.
Many composers (Alvaro Company, Nuccio D'Angelo, Anthony Sidney, Oliviero Lacagnina, and recently Chick Corea) have been inspired to write for Flavio
It can thus be said that he has contributed to enriching the repertoire of classical guitar.
He is a professor at the Conservatorio Mascagni of Livorno since 1986.