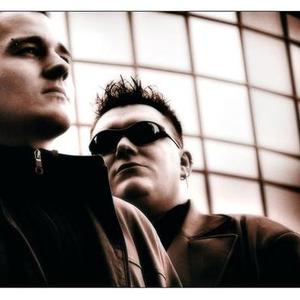 This profile represents six bands/artists with the name Flatline: (1) Flatline are/were a hardcore band from St. Albans, England. Featuring distinctive socio-political lyrics and a combination of 80s hardcore, modern guitars and unique vocals, the band are currently on hiatus. Guitarist Rich Williams has gone on to produce demos and albums for the likes of Gallows, Enter Shikari and Kid Cosmic.

(1) Flatline are/were a hardcore band from St. Albans, England. Featuring distinctive socio-political lyrics and a combination of 80s hardcore, modern guitars and unique vocals, the band are currently on hiatus. Guitarist Rich Williams has gone on to produce demos and albums for the likes of Gallows, Enter Shikari and Kid Cosmic.

(2) Flatline is a Death Metal/Post Hardcore band from St. John's, Newfoundland, Canada. Originally formed under the name "Shatterbox", they have grown to be quite popular in the Newfoundland metal scene. Flatline features heavy breakdowns, crazy sweeps, mad double kick, and brutal vocals. In a mutual agreement, Flatline disbanded in the summer of 2006 . On February 15th, 2008, Flatline played a reunion show at the CLB Armory, opening for Protest the Hero.

(3) Flatline is hardcore band form Bosnia and Herzegovina. The band is formed in the beginning of 2005, and these are band members: MUAMER-vocals IGOR-bass and the two founders of the already known Sarajevo hardcore band Kontra SLAVEN -guitar and ZLATKO drums. They play a mixture of hardcore and metal music, and the greatest influences are bands like Black Sabbath, Led Zeppelin, Iron Maiden, Motorhead, Sick of it all, S.O.D., Biohazard, CrOmAg, Madball, Anger, D.R.I., Slayer, Pantera, Napalm Death, Crowbar, Down, Sepultura, Messhugah as well as many others appearing at the hardcore scene since the 80s. All the lyrics are written in English, and they are all socio-politically oriented, depicting the personal struggles during the aggression and everyday life, which is very well familiar to all the Bosnians and Herzegovinians (the emphasis is on Bosnians and Herzegovinians, instead of Serb, Croats and Muslims). During a very short period, having worked very hard, the band has recorded a live demo featuring 9 tracks, and has played a number of gigs, of which it is important to mention appearing as the opening band for the croatian alternative rock band Let 3, at the Sarajevo Youth Center Grbavica, performing at the open air summer festival ?Sarajevo Rock Forever?, and opening for legendary TRASH metal band Tankar(Frankfurt Germany), Cerebral Turbulency, grindcore Czech Republic & Poppy Seed Grinder (brutal death metal hc from Czech Republic), Devastation (CORPUS CHRISTI, Texas) United States, Napalm Death (UK) and many other bands. EUROPE tour 2007-2008-2009(Croatia, Slovenia, Cz.rep, Germany, Swiss, Holland, Turkey, Macedonia).
Myspace : http://www.myspace.com/flatlinebh

(4) Flatline is a metal/thrash band from Los Angeles, CA in the United States. Inspired most notably by Slayer, Megadeth, Metallica, Pantera, their albums have become successful with a growing number of metal fans in the United States with the releases of their albums: "Redefining the Edge", "Massive Aggressive" and the newly released album, "Pave the Way" with their label, Stand and Deliver Records.

Due to the success of the digitally distributed release "Pave the Way" through Stand and Deliver Records, the album was released in stores across the United States on February 3rd, 2009, thanks to a newly inked physical distribution deal with Uprising/Sony Red. Flatline's music is also now available on iTunes for immediate purchase and download. The band toured in February 2009 with Straight Line Stitch, in support of their release, which was recorded with MachineHead and Soulfly guitarist Logan Mader at the helm, on dates booked by Thunderdome Touring. As of June, 2009 the band is on tour with Threat Signal and The Agonist across the eastern United States.

The band has also shared the stage recently with numerous well-known bands on tours throughout the US. August and September of 2008 found Flatline tearing it up with 36 Crazyfists, Walls of Jericho and It Dies Today. Shortly after that tour, the guys joined the Century Media band, In This Moment, on several dates of their successful tour. They've also done shows with Becoming the Archetype, and A Different Breed Of Killer. At the end of 2008, the guys teamed up with Divine Heresy and Five Finger Death Punch for many memorable shows across the midwest portion of the USA.

Flatline was notably added to the Rockstar Mayhem Tour Sampler CD and was also voted "Emerging artist of the Week" on 103.1fm's Los Angeles radio show, Chaos with Full Metal Jackie. Flatline has regularly performed at the famed clubs in Los Angeles & Hollywood such as The Whisky and The Troubador.

They have toured out of the USA, most recently showcasing their brutal live stage performance by travelling to Auckland, New Zealand to play the "666-Metal Day Out" festival and then to tour the entire northern island. Flatline is sponsored by Floyd Rose, NO FEAR, Evil Threads, Monster Energy and Sik World. They have been honored by the renowned Independent Artists Registry by being one of 34 bands out of 4,000 chosen for a 2006 sponsorship and LA's Rock City News took notice and awarded the band the distinction of being the "Outstanding New Band" at their 11th annual awards show that same year.

(5) Flatline is a Mexican rapper from Corpus Christi, TX.

(6) Flatline is a horrorcore group signed on Lyrikal Snuff Productions.

(7) Flatline was a hard rock band from NJ who released their second album, Revelation, in 1999 featuring the tracks "Dying", "Spit on You", "Revelation", "Evil Bitch", "Mistakes", "Shallow", "Fiend", and "Letting Go". http://www.myspace.com/flatlinevilbitch