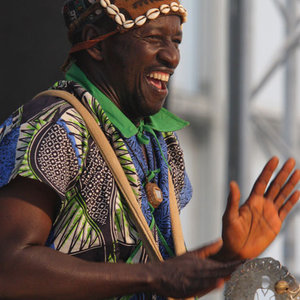 Adama Dram? (1954) is a djemb? drummer from Burkina-Faso. ~~~~~~ Master drummer Adama Dram?, born in 1954 in Burkina Faso, is a 6th-generation djeli from the Malink? region of West Africa.Once Dram? decided to follow his father in the griot tradition, they practiced together extensively, and he became a full-fledged member of his father's group at the age of 12. Along with his performing and recording duties, Dram? is a djembe instructor and artistic leader of Ballet Foliba. (Excerpted / Paraphrased from: Heather Phares, All Music Guide)

~~~~~~
The Malink? people, whose kingdom was established in 1213, extended their power from Guinea to Algeria as far as Gao on the river Niger. Their homeland was situated in the mountainous country west of Bamako, Mali. The Malink?s created one of the richest musical traditions in Africa. (Paraphrased from discographical notes on the Mondomix website)