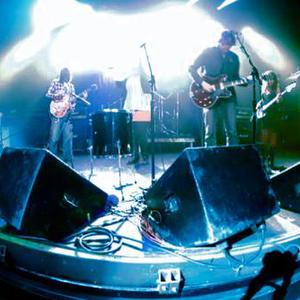 First Communion Afterparty's music belongs to a distinct family: psychedelic rock. It's true: there is no other honest way to describe it. Their sound is built on psychedelic bands you've heard and some you haven't. There is nothing unfamiliar but there's a fresh personality behind it. Each song is an artful balance of dual guitars, bass, keyboard, tambourines, drums, floor tom and vocals from all over.

A sprawling commune of a band, these prophets of new psychedelia combine the percussive shake of a den of rattlesnakes with waves of guitar that warp and shimmer like heat coming off a stretch of desert blacktop. FCAP's loose-limbed bohemian jangle and drugged-out drawl are a seductive invitation to get on the bus and head west.
Take six kids with disaffected stares, add droning guitars and keyboards, toss in some superfluous percussion and top it all off with a vaguely sacrilegious name, and you've got First Communion Afterparty, a band that's already inspiring friends and enemies with equal amounts of passion.
So, even if First Communion Afterparty are weirdo cult figures visiting us from hazy hey days of the past, let's embrace them. Their music (cleverly cultivated for decades and scientifically delivered to us in the present) is some of the best we have in the Twin Cities.

Sorry For All the Mondays and To Those Who Can't Sing