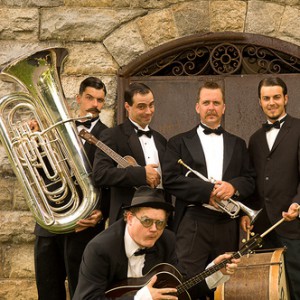 With jubilant vigor that spills from the stage to the streets, Firecracker Jazz Band revitalizes the energy of the roots of Jazz. In paying homage to the pioneers of early 20th Century Jazz, including that of Dixieland and New Orleans, the Firecracker Jazz Band carries the torch that was once lit by such greats as Jelly Roll Morton, Louis Armstrong & Bix Beiderbeck. Je Widenhouse (trumpet and cornet) has been traveling the world and playing professionally for 15 years. Previous projects include Squirrel Nut Zippers, Sex Police, and Hobex.

Je Widenhouse (trumpet and cornet) has been traveling the world and playing professionally for 15 years. Previous projects include Squirrel Nut Zippers, Sex Police, and Hobex. This ensemble is especially rewarding and challenging, and Je has endeavored to accept Jazz as his personal savior.

Earl Sachais (trombone) is a former music instructor and New York City hired gun for the performing ensembles such as Warren Covington and the Tommy Dorsey Band. He has backed Barbara Streisand, Sammy Davis Jr, and many others. Earl has a Bachelor's and Master's of Music Degree from the Manhattan School of Music.

Reese Gray (piano, banjo, ukulele and saw) is an amazing stride pianist in the style of Fats Waller. He embodies the early American jazz scene, dressing the part and with raw enthusiasm for the music that keeps it fresh. Former projects include Squirrel Nut Zippers and Asylum Street Spankers.

Jon Corbin (guitar) adds a steady swing to the rhythm section on guitar and tenor banjo. He patterns his playing style with the Firecrackers after Eddie Lang and Django Rienhardt, the pre-eminent guitarists of the early jazz era. Former projects include The Rib Tips and the Eliza Lynn Band.

Michael Gray (drums) drives the rhythm with an energy and expressiveness rarely demonstrated in traditional jazz. A native of Baltimore, and the younger brother of pianist Reese Gray, Mike's musical influences include Baby Dodds, Papa Joe Jones, and Buddy Rich.

Henry Westmoreland (tuba) incorporates a funk, zydeco, and boogiewoogie rock & roll influence to the heavy hitting rhythm section. Henry is a graduate from Brevard College with a degree in Music Theory / Composition and a degree in Music Performance. He also plays baritone saxophone with the popular band The Squirrel Nut Zippers.