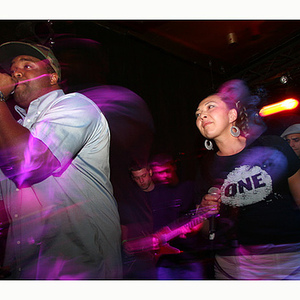 Finless Brown is a live funk/hip-hop band based in San Francisco, CA. With members hailing from Japan, Santa Cruz, Marin, Philly, Cleveland, and Detroit, Finless Brown brings a unique sound to the scene that has drawn comparisons to trip hop acts such as Portishead, hip hop acts such as, the Beastie Boys and the Roots, and soul funk outfits such as, Dee Lite and the Brand New Heavies. Fronted by the husband and wife duo of Paulie Rhyme and bilingual singer/emcee Moto (who sings and rhymes in English and Japanese)...

To date, Finless Brown has released 3 studio projects and 1 live album, garnering critical acclaim for their brand of ?politically charged party music? and receiving airplay not only stateside, but in the Canada, Europe, and Japan. They have been featured in publications such as, the SF Weekly, the Cleveland Scene, East West Woman, West Coast Performer, and a host of music websites and blogs. Finless has also been seen alongside acts such as the Beatnuts, Non Phixon, Killarmy (WuTang Clan), Grammy nominated jazz drummer Greg Bandy, Grand Agent, and hip hop legend, KRS One.

Finless Brown put out their last project in 2007, ?Underground Superheroes?, their first record since relocating from Cleveland, OH. This 5 track Ep takes the listener through various layers of the Brown, from the jazz soul influenced, ?Cross My Mind? to the politically charged ?Hamburger Hill? to crowd favorites, ?Gasoline? and ?Underground Superheroes?. The ?Underground Superheroes? Ep is available at retail locations in California, Ohio, Oregon, Idaho, and online at Best Buy, Amazon, Cdbaby, and Itunes. After the release, Finless Brown disbanded to pursure other interests, enjoy life, and go in different directions. Since then Gordo has been Djing all across the US and holding down various residences in the Bay Area, Dan has moved on to family life, and Moto, Dave, and Paulie Rhyme have been working on a new live band project, Miles Outside. Paulie Rhyme has also been touring as a solo act and building up the boutique label Browntown Wreckords, inspired by the Ep that bears the same name. Moto also released a solo Ep this year entitled, She's Everywhere, produced by SF's Dj Deedot.

you can check out more info at www.paulierhyme.com