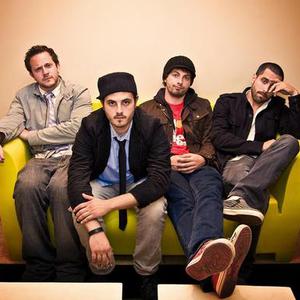 "We hate L.A., we love L.A. It's similar to how we feel about our own lives," says Justin Miner, lead singer for Los Angeles based indie-rock/pop outfit Fight From Above. "We wanted to try to capture that feeling on the record and claim the parts of the city we love for our own." Judging by their debut full-length L.A. Kids, they have undoubtedly carved a distinct niche for themselves in the crowded Southern California music scene.

Judging by their debut full-length L.A. Kids, they have undoubtedly carved a distinct niche for themselves in the crowded Southern California music scene. Equal parts insightful lyrics, crafted pop hooks, and propulsive energy - Fight From Above manages to combine many disparate influences while still sounding cohesive, and yet also not quite like anything you've heard. Some elements suggest comparisons to bands like The Kooks, Phoenix, and Hot Hot Heat, while others suggest Death Cab For Cutie, The Shins or Modest Mouse.

Songs like "Between The Curves" (which is currently getting consistent play on influential L.A. rock station KROQ and was featured on MTV's "The Hills") and "Raindrops" embed themselves in your head upon the first listen, while fan-favorites like "Saticoy" and "Alexander's Bus" brim with barely contained energy and enthusiasm. Still, nothing on the record quite compares to seeing them live, where the band has developed an undeniable reputation for passionate, frenetic live shows. Their persistent dedication to their live performance has earned them a loyal following in and out of Los Angeles.

Fight from Above consists of Miner (vocals, guitar), his brother Jeremy (lead guitar), Krook (bass) and Dave (drums). The boys are currently playing shows to promote their latest release (Hermano EP). Their music has been featured on L.A's KROQ 106.7, STAR 98.7, Rock The Vote, as well as MTV's "Real World" and "The Hills".

It's Just Something To Say