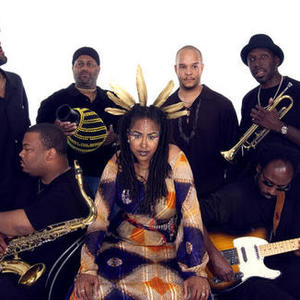 In 1997 a dynamic young music trio rose out of Baltimore and became one of the world's most successful independent acts in soul/jazz music. Founded by composer/producer/musician James Collins, Cleveland diva Navasha Daya, and the drummer Marcus Asante, Fertile Ground became a staple of the independent soul circuit and has toured extensively throughout the world. According to discogs.com, Fertile Ground has released five albums, ten singles/EPs, and one compilation album. They also have over 70 appearances on albums, singles and compilations by other artists.

According to discogs.com, Fertile Ground has released five albums, ten singles/EPs, and one compilation album. They also have over 70 appearances on albums, singles and compilations by other artists.

Fertile Ground has shared the stage with such multi-platinum heavyweights as Cassandra Wilson, Hugh Masekela, [artist]Me'Shell N'Degeocello, India Arie, Wynton Marsalis, Jill Scott, Chaka Khan, and even Run DMC. The band is often classified as Soul-Jazz, but they spill out of any genre as a cross-cultural fusion of all things spiritual and funk-ridden.

In this realm called good music, theatrics never replace integrity, nor does experience and success replace a creatively fresh approach to each project. Messages are heart-felt, conveying an unashamed spirituality, a firm political stance, or whatever the moment requires, and everything is heavily supported by raw, organic, often danceable compositions in the tradition of Fela Kuti, Stevie Wonder, Santana, and Earth Wind & Fire.

With the requisite strength, depth and energy to electrify crowds, musicians, DJs, journalists, and promoters not just once or twice, but over and over again, Fertile Ground has been cementing their place as musical and social innovators.