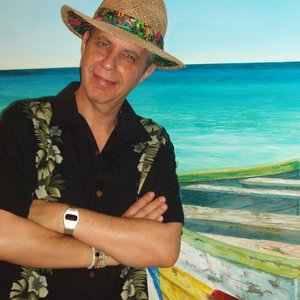 At age of two, he began to practice piano. At four, he performed at his first classical piano concert. At sixteen made pop music and one year later signed his first recording contract with a record company with the band La Joven Guardia (?The New Guard) recorded the first rock album sung in Spanish, and became the number one selling rock group in Argentina and Latin America; they received two gold awards

He was honored as best composer by Argentina's copyright control society and won the prize ?Racimo de Oro? de San Juan
Pando won the CLIO's award (Coca Cola)
He composed the Anthem of the Olympian World Games in Germany.
He had produced in Germany and children's series for Sesame Street.
He worked for the Grey Gruppe Deutschland and produced musical compositions for films, theatre, documentaries.
In 1996 he was contracted as musical arranger for the Berlin Philharmonic Orchestra DDR. For Russmann' Record Studio (Germany)
He arrang. the Germany's Rock Group BAP
Since the mid-1990's he has centered his attention on music with a function: music that allows the listener to be transported to a relaxed and comfortable state of mind; this project titled was ?The Art of Living? for this series he had created 2 productions with famous musicians like Andy Narrell and Rodolfo Mederos, these productions are: Paradise Caf? and Tropical Garden
He had produced music for Babies with instruments such as viola, violin, music box and flute, with the appropriate frequencies for the delicate hearing of a newborn, is a perfect method for help their intellectual development, his productions are around the world: some of them are:
Paradise Caf?
Tropical Garden
?Solo Para Bebes" (Only For Babies) BMG label,
?Clasicos Para Mi Bebe? (Classics for my Baby) by Lideres (Univision)
?Baby' s First Music? , ?Happy Babies? and ?Lullabies? by Perleberg Europe
?Musik fur Kleine OIren? (Music for Small Ears), by Universal Records, Europe.
He also had produced music for Disney's shows

Mozart For My Cat