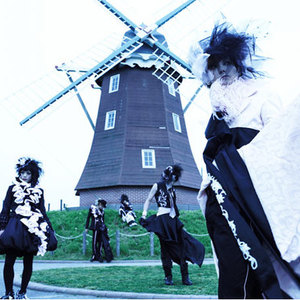 There are multiple artists under the name Fatima: 1. Fatima was an indie visual kei band in Japan, created in 1998 and active until 2005. The band's sound and style was deemed 'sexy and extravagant', coupled with lyrics that were thought-provoking and a frontman who always seemed an enigma in himself. Fatima's final line-up consisted of: Kanoma (first known as Hitomi, later Sanaka) on vocals, Mizuha and 4ge (pronounced Shi-ge) on guitar, Lay on bass, and Towa on drums. The band released 9 singles and maxi singles, one full album entitled Exit, and one live DVD before disbanding in 2005.

1. Fatima was an indie visual kei band in Japan, created in 1998 and active until 2005. The band's sound and style was deemed 'sexy and extravagant', coupled with lyrics that were thought-provoking and a frontman who always seemed an enigma in himself. Fatima's final line-up consisted of: Kanoma (first known as Hitomi, later Sanaka) on vocals, Mizuha and 4ge (pronounced Shi-ge) on guitar, Lay on bass, and Towa on drums. The band released 9 singles and maxi singles, one full album entitled Exit, and one live DVD before disbanding in 2005.

-
Kanoma and Towa are both currently in the band Moran. Kanoma has changed his name back to Hitomi and Towa is now going by the name Soan.


2. A Swedish soul songstress.
If you've spent any time at London's Plastic People club, you know that the musical fare on tap changes nightly. It's on this eclectic menu where you're most likely to be served the mellifluous floetry and soulful cookin' of Fatima Bramma-Sey, the first lady of Floating Points' and Alexander Nut's Eglo Records, one of the hottest young labels in London. This is largely due to the fact that, at the mic, the 25-year-old known simply as Fatima is electric. Her ability to improvise and cover a wide range of musical styles was an inspiration to Nut, who quickly became a fan and invited the young Swede into the Eglo fold.

With Mindtravelin', the young singer's debut EP, she brought the electricity of her live performance into the studio, where some hotly tipped producers supplied the driving funk beats for the stellar four-song mix of nostalgic and modern sounds. The record manages to classily meld London's penchant for retro-soul stylings with LA's Stones Throw/beat-scene vibe, particularly on the Dam-Funk-assisted slow jam, "Warm Eyes," and the sizzling Funkineven collaboration, "Soul Glo." "I think growing up in the '90s, when you had all these dope singers around?Aaliyah, Missy, Brandy, Mary [J. Blige], TLC?it was impossible not to get inspired in some way," she says of some of the more immediate reference points for her unmistakable sound. But that's to say nothing of the funk and soul artists like George Clinton, Rudy Rae Moore, and Betty Davis who also perked her ears up. "Imagine that collabo! Pretty mad," she comments.

Fatima's musical approach is also deeply tied to her own diverse roots. Growing up in Sweden as the child of a Senagelese/Gambian, "music-lovin'" mom who owned a boutique in Stockholm that traded in African wares, Fatima was exposed to the rich vibrations of West African music from an early age, sparking an interest in the many musical styles that African rhythms have engendered. Now she's managed to bring all those raw styles together. "The combination between soul and electronic sounds is the future," she offers. "On the other hand, it doesn't matter what instruments you've got to make tunes?the mind is the only thing that can limit yourself at the end of the day."

Lately, Fatima has been working on a new record with Floating Points. "I think this EP feels a bit more live, in the sense that we actually both recorded in the same room, playing our instruments live simultaneously," Fatima says. "It's a mix of written tunes and improvised sentences and melodies." Though she proved her studio chops on Mindtravelin', the energetic Fatima is eager to infuse her new EP with that inimitable energy of live performance?it's what she's in the game for: "I just love that raw, pure energy from the bumpin' soundsystem, and the people dancin', lettin' loose, jellyshakin', and head-boppin'," she says. "Not thinkin' about tomorrow and just livin' for the moment."


3. One of the strongest bands in Latin rock emerging from Los Angeles! Since their participation @ the 2007 SXSW this group has not stopped working. A 30 city tour through the U.S. and Mexico kept them busy telling everyone that would listen about there upcoming album ?Escuchame?.

With a successful year behind them, their DIY work ethic got stronger. In 2008, ?Escuchame? was released in the U.S. with Track 1, ?Con Tus Palabras? at number 6 on the Radio y Musica U.S. charts. FATIMA hit the road in support of their new album, and headed down south to warn everyone that ?Escuchame? was coming to Mexico. Their hard work and word-of-mouth buzz keeps their fan base growing by the thousands. 2008 was definitely their best and busiest year to date.

In 2009, they will continue full steam ahead. They plan to work harder than they ever have. They plan to record a new album. BUT First! 2009 will include ?A Story To Tell Tour? Throughout the US, and Mexico, they will be screaming ESCUCHAME!

"Escuchame" the single is currently in rotation on radio in the U.S. and Mexico.
"Con tus palabras" spent 3 months in 2008 in the top 20 rock alternativo R & M U.S. Charts.

5. Fatima was an alias of 80s synth pop artist Georg Kajanus and Frankie Boulter (aka Data). They produced the club hit ?Hassan? which was remixed by Razormaid.

And Yet It's All Love