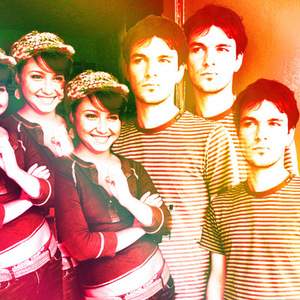 Father Bloopy is a musical collective fronted by singer/songwriter/guitarist Roger Houdaille. Ginger, Baby, their eclectic debut album by this indie-rock group released on Dippy Records, has a classic sound that you'd swear you've heard before. The leadoff title track is so catchy that at first listen you find yourself singing along as if it is one of your longtime favorite songs. The only problem is that these are new songs, by a new band, comprised of a bunch of kids in their early twenties.

Self-described diehards and collectors of early 60's and 70's art-rock, Father Bloopy's first album pays homage to a variety of obvious influences, including the Kinks, Lou Reed, and ELO, but they add a unique flair and a modern twist to the mix that is edgy and invigorating.

Clever as hell from start to finish, Ginger, Baby is filled with wry, witty lyrics that will please fans of smart-pop in addition to those who feast on catchy melodies and creative production. The band's sophisticated sound may be due in part to the fact that the group's singer and chief songwriter Roger Houdaille was already an established and experienced recording artist and touring musician well before the launch of the Father Bloopy project. Houdaille is also the bassist of the alt-rock band Transcendence, touring the club circuit years before he was old enough to qualify as a paying customer. That experience brings a creative vision and a maturity to Father Bloopy's eclectic sound.

?One minute Roger Houdaille is Jonathan Richman jamming with Brian Eno on the title track, with similar Lou Reed talk-singing, the next he's Ray Davies doing wistful pop-tunes like ?Pepper Tan? or ?Miss Morality,? reads a review from The Big Takeover magazine. ?We felt the need to represent the music we like,? stated Houdaille in a recent interview. Fans and critics alike seem to share his sentiment. Lee Zimmermann of New Times Magazine described Father Bloopy's music as ?expressive and intriguing? smooth grooves and vibrant melodies create a heady brew.?