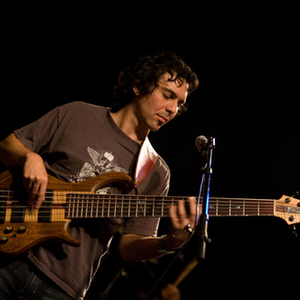 Adam Nitti has emerged as one of the cutting edge bassists and composers in the world of instrumental jazz and rock. Based out of Nashville, Tennessee, Adam currently has 3 CD's released on his own Renaissance Man Records label. Adam has toured with the Dave Weckl band, Jeff Coffin Mu'tet, the Justice League, and Angie Aparo, and has also performed with such legendary artists as Scott Henderson, T Lavitz, Peter Erskine, Jimmy Herring, Mike Stern, Kirk Covington, Susan Tedeschi, Wayne Krantz, and many others.

He is currently the bassist with Steven Curtis Chapman, a 5 time Grammy winning artist. In addition to being a performer and composer, Adam is also Chief Learning Officer for MusicDojo.com, an interactive online music school. He is also a bass clinician for SWR, D'Addario, and Warrior Instruments, and is a staff instructor for Victor Wooten's bass & nature camps. Adam is also a columnist for Bass Player magazine, an adjunct faculty member of Lagrange College's school of music, a first-call session player, and has done dozens of clinic and performance appearances at such events as the Bozeman Bass Bash, Bassquake, Euro Bass Day, and Bassup! He is currently working on his 4th solo record, which is due to be released 4th quarter 2005.

The World Is Loud

Not Of This World