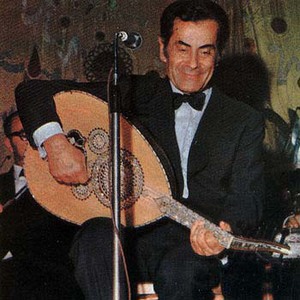 Farid El Atrache (1915-1974) (Arabic: ???? ??????) was a Syrian-born Egyptian composer, singer, actor, and oud virtuoso. Farid was born to Syrian Druze nobility, the Atrache family, who led the Druze fight against both the Ottomans and the French Mandate in modern-day Syria and Lebanon. He is one of the most important names of twentieth century Arab music. His sister Asmahan was also a skilled singer, though her career was cut tragically short by a controversial car accident. Early life

Farid was born in Syria to a Druze princely family who fought the French Colonial armies. In the mid 1920s he moved with his family to Egypt escaping the French occupation, later on they were naturalized by the Egyptian government. Farid's mother sang and played the oud, which spurred his musical interest at an early age.

As a child and young adult, Farid sang in school events. He studied in a music conservatory and became an apprentice of the renowned composer Riyad as-Sunbaty. In the 1930's, Farid began his professional singing career by working for privately owned Egyptian radio stations. Eventually, he was hired as an oud player for the national radio station and later as a singer. His sister, Asmahan, was also a talented singer, and for a while they worked together. In 1941, they starred in their first successful movie, in which Farid himself composed all the music.

Farid had a long and colorful music career lasting four decades. He composed musically diverse songs, and was a highly regarded composer, singer and instrumentalist. Farid maintained that although some of his music had western musical influence, he always stayed true to Arab music principles. Although the majority of his compositions were romantic love songs, he also composed several patriotic and religious songs.

One of Farid's most unusual and distinguishable traits was his voice. High and mellow at the start of his career, it evolved into a wider, deeper sound. A person not familiar with his work would find it hard to believe the singer in "Ya Reitni Tir" (1930s) and "Adnaytani Bil Hajr" (1960s) were the same singer. His singing style was deeply passionate.

In many of his songs, and nearly all of his concerts, Farid would sing a mawal, which is a slow voice improvisation of a few poetic lines. These improvisations sometimes lasted up to 15 minutes. The mawal was a favorite of his fans.

Farid starred in 31 Egyptian musical films from 1941 - 1974. His last movie, Nagham Fi Hayati, was released after his death. All his films except the last two were black and white. They ranged from comedies to dramas, or a combination. Farid composed all the songs in his movies including the songs sung by other singers, and instrumentals (usually belly dance routines). His earlier films would include approximately ten songs, but overall the films would average about five songs each. Some of Farid's famous movies include Intisar al-Shabab, Yom Bila Ghad, Ahd el-Hawa, and Lahn al-Kholoud.

Quick success brought the young man a lifestyle of nightclubs, love affairs, and gambling. Soon Farid was in debt and found himself abandoned by his disapproving mother. During this difficult period of his life, he also endured the death of his sister and fellow performer Asmahan. Farid found comfort in a relationship with the belly-dancer Samia Gamal, for whom he was motivated to risk all he owned. In 1947, he produced and co-starred in a movie with Samia, and it became a huge success.

Five films later, the unmarried couple broke up. Farid continued to work with other film stars in numerous successful movies in which he always had the romantic lead role of a sad singer. He even repeatedly chose his character's name to be "Wahid," meaning lonely.

Farid refused to get married, claiming that marriage kills art. In his films, the audience remembered his leading ladies and Farid's beautiful songs more than the story lines.

Prior to the 1952 military coup d'?tat against King Farouk I, Farid became friends with Farouk's consort, Queen Nariman, a relationship that continued after the Queen's divorce and the coup that cost Farouk his throne. The former queen's family did not accept Farid, and the separation from Nariman sent the singer into a long depression, the start of health problems that worsened from that point on until his death.

As Farid became older, he reconsidered his opinion of marriage and proposed to Egyptian singer named Shadia, but at the last minute he backed out. By now his health was poor, and Farid feared that he would leave her a young widow. He often played out that scenario and sang about it in his romance movies.

Farid El Atrache was proud of his Arab heritage and never failed to make it known. He held four Arab nationalities: Syrian, Lebanese, Egyptian and Sudanese.

Farid suffered from heart problems throughout his last 30 years. In the last few years of his life, he became physically thinner, and his singing voice became raspy as his sickness intensified. Although he was struggling with his health, he continued to make movies and perform in concerts until he died. On December 26, 1974, Farid died in Beirut at Al Hayek hospital. Farid is buried in Cairo, Egypt alongside his sister and brother.

Over his lifetime, Farid starred in 31 movies and recorded approximately 350 songs. He also composed music for such famous singers as Wadih El-Safi, Shadia, Warda, and Sabah.

Farid El Atrache has left a legacy to Arabic music. He was dubbed as the King of The Oud.

Legendary Songs of Passion and Musical Extacy of the Arabian Nights