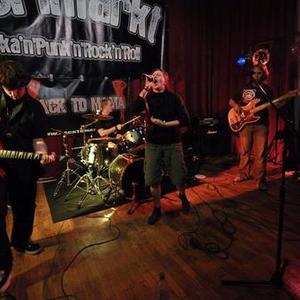 There are at least four bands under the name of Faded ( listed here in chronological order) at one point on 2002 there were 5 other bands all trying to use the same name...! #1 Faded formed in the summer of 1997, emerging from the depths of the gloomy, foggy sunset district of san francisco. The band featured darren thompson on guitar, molly pettit on vocals, marco zermeno on bass guitar, and jeremy true on lead guitar, sampling and everything else. most of the music was written by jeremy, with a few notable collaborations with longtime bandmate darren.

#1 Faded formed in the summer of 1997, emerging from the depths of the gloomy, foggy sunset district of san francisco. The band featured darren thompson on guitar, molly pettit on vocals, marco zermeno on bass guitar, and jeremy true on lead guitar, sampling and everything else. most of the music was written by jeremy, with a few notable collaborations with longtime bandmate darren. jeremy and molly shared lyrical duties, often collaborating on lyrics for maximum effect. Darren and Jeremy had been playing together in bands since 1990, taking on the shoegazer/alternative/dream pop style around 1993. their two-guitar interplay allowed for a rich, layered, sound, with a variety of complementary guitar effects, often compared to the Cure, Slowdive, or My Bloody Valentine. after a few years and a few singers, Molly Pettit was recruited to front the band in 1997, with a definte Siouxsie Sioux influence. Bassist Marco Zermeno, fond of bass heavy groups as New Order and U2 rounded the ensemble nicely. they recorded a demo tape which was warmly reviewed by San Francisco's The Guardian, and began playing the local club scene. faded quickly started to gain a following as an incediary live band.
in 1999 "the low side of ok" was released to critical acclaim and heavy college radio & club rotation. songs such as "Over" and "Cold Wind" were heard blasting from many bay area goth clubs, and KZSC radio pranced "the low side of ok" the #1 new gothic/darkwave album of the year for 2000. (see "the low side of ok" on this website for more album info)
however, in 2000 internal friction caused the departure of Zermeno and Pettit (thompson had left the band for personal reasons in early 99). this caused a major rethinking of the band for main songwriter Jeremy True. reluctant to advertise for a whole new band, and looking at a backlog of many 'solo project' songs that had been put on the backburner for many years, True decided to re-envision the band, with his wife, Christina True.
re-christened "faded sf", as a nod to san francisco, and to separate themselves from the glut of new bands all naming themselves 'faded', Christina took over the bass guitar playing, and vocal duties for half of the songs. the songs she sang lead on remained close to the classic 'faded' style, while vocally bringing to mind Darling Buds or the softer tones of Bilidna Butcher (from my bloody valentine) Jeremy started singing lead again on many songs, with comparisons to Dean Warham of Luna, or Bernard Sumner of New Order.
'broken down, breaking down" was an 9-song CD released in a limited pressing in late 2009, featuring new favorites such as Final, West, Hours, Sincere Lies, and more. faded are hard at work on the next CD, with sneak peeks of videos and songs on myspace and facebook... check it out!

#2 Faded is an Italian Black Metal band, with various other influences, from for example Doom Metal and Folk music. Formed in 2003 by the two members Mkh979 (vocals, synths) and Framaz (drum programming, bass, guitars). They released two albums (Abandoned Shadows from 2004 and Essences from 2005) after the release of one demo in 2003.

#3 Faded was formed in 2005 by Josh Benjamin and Mitch Swanger. With a distinct writing style and sound, the two were able to capture their love for the classic rock, classical, and hard rock genres in a way that they'd never assembled before. After a few songs were written, Benjamin showed Nick Osborn the song, "Crawling Closer", while recording on Benjamin's other projects. Without knowing Osborn's full rock-vocalist capabilities, Osborn sang a few verses and the rest, as they say, is history. After countless sleepless nights of writing, recording, mixing, and mastering, Faded finally released its debut full-length album, "The Last Hours" on Dec. 1st, 2007. The album, which took over 6 months to record, is described by Benjamin as a "journey". "I'm not just talking about the process of making an album, but the actually album itself." "The Last Hours" features 12 tracks that are carefully connected to create "1 long song". Featuring fan favorites such as, ?Bleed?, ?A Safe Place?, and ?Take Me Away?, "The Last Hours" has been selling well in the Northwest and even worldwide, elevating Faded to a new level of success.


#4 Faded is a German Alternative Rock/Metal-Band founded in Winter 2007.