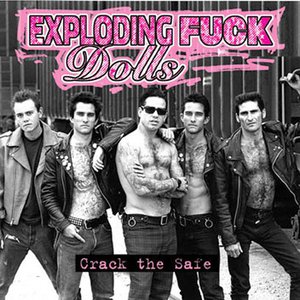 The Orange County punk explosion of the 1990's was ignited, for the most part, by the Exploding Fuck Dolls, ask any of their successful contemporaries who once shared the bill with the Dolls (No Doubt, Sublime, Offspring, Fu Manchu, Pennywise...). Timing is everything for a band in the music business, theirs is a story of timing, good and bad. The band was started in 1991 by Art and Steve Godoy (twin tattoo artists and ex-pro skateboarders) and singer Kevin Edman, they were soon joined by bassist Devin Gilmore.

Timing is everything for a band in the music business, theirs is a story of timing, good and bad.

The band was started in 1991 by Art and Steve Godoy (twin tattoo artists and ex-pro skateboarders) and singer Kevin Edman, they were soon joined by bassist Devin Gilmore. The genius songwriting and strong live performance of this line up saw action for less than a year and ended with the untimely death of singer Kevin. Fortunately a 4 track recording and a live tape form their mixing boards of 2 San Diego shows has documented the punk power and humor of the original Fuck Dolls... The band immediately dissolved after the tragedy and saw Devin re-locating to Hollywood and the twins staying in San Diego county and taking a tattooing job in Orange County where the buzz of the Exploding Fuck Dolls had only just begun, it was 1992. A strong need to reform saw the coincidental recruitment of Duane Peters (U.S. Bombs), the goat man and Ricky Johnson. The twins moved to the city of Orange. This line-up saw the most success, in less than 9 months gigs were happening, tours on the west coast, recordings, videos and the release of the now collectible American Bomb 7" on Vinyl Dog records, there were slots opening for punk heavies: Social Distortion, Big Drill Car, the Dickies, the Mentors, U.K. Subs and tons of headlining gigs with smaller bands (at the time) opening -- Sublime, Decry, No Doubt (pre-Gwen), Pennywise, Fu manchu and others. Duane (Front), Art, Steve, Ricky, Goatman (L-R)A huge fan base was established and soon, despite an 'offensive' band name, major label interest followed... but as the Orange county punk scene exploded and all the bands were being signed up, the Fuck Dolls exploded too, it was over, this was the end of 93.

There was always a crisis in that particular band line up, wether it was rehab for one of the members who had a problem of the lack of commitment from another but the band would always play one way or another, position replacements were always handled. During the wave of signings, the band were in another crisis which not only saw that line up terminated but a missed chance at the major label success of their contemporaries. Several recording from the time period have been saved and server as a further proof of the power of this band. The "City Action" / "Little Girls" 7", which was due for release that month, was aborted because of the split up and will appear in it's entirety on a future D.H.D. Records Division release. "City Action" appears on the "Here's to Your Fuck" cd.

The only common denominator consistent in the band were it's founders, the twins. From 1994-1997 the Exploding Fuck Dolls carried on, once again hiring and firing several members until the recruitment of the bass playing phenomenon Peter Campbell, in 1996/97, finally a line-up without problems. It was the start of a whole new direction, a whole new style of writing. Now a trio, the Fuck Dolls resumed their busy gigging schedule, while the twins divided their time between the Fuck Dolls and as the back up band for Deniz Tek (ex-RadioBirdman)... positions which they still hold... one night, after a gig, while unloading the gear at the band's house, Kris Swanson was walking past. His look was very reminiscent of Joe Strummer, as is his voice (which was yet to be discovered). He was stopped and asked if he would audition as singer... he was tried out the next day and was immediately hired. He was given 5 days to get lyrics ready for the upcoming recording session and this is what you hear on the first 3 songs of the "Here's to Your Fuck" disc out now on D.H.D. Records Division label.

Here's to Your Fuck