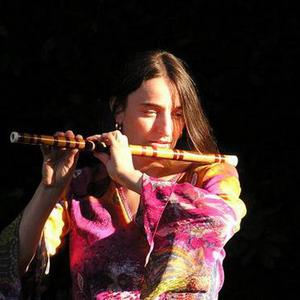 There is more than one artist with this name: 1. EXISTENCE is the name of a project founded by Margot Reisinger. It joins worldmusicians from different styles and cultures to find a musical expression for unity, hope, peace and freedom for all mankind. With great insight, technical skill and creative cooperation Existence creates organic new music. Thus the fascination and attraction between different cultures, styles and tempers brings forth a unique variety of musical masterpieces: Qi?Chi?Ki - A meditative voyage to the Far East, exploring the source of vital energy and concentration

1. EXISTENCE is the name of a project founded by Margot Reisinger. It joins worldmusicians from different styles and cultures to find a musical expression for unity, hope, peace and freedom for all mankind. With great insight, technical skill and creative cooperation Existence creates organic new music. Thus the fascination and attraction between different cultures, styles and tempers brings forth a unique variety of musical masterpieces:

Qi?Chi?Ki - A meditative voyage to the Far East, exploring the source of vital energy and concentration

Dahmani - The splendour and magic of an Oriental journey

INDIA - Music For Inner Balance
A meditative passge to India, the holy land of spiritual endeavour, saints and miracles, rituals and retreat!
A wonderful background for Yoga, Relaxation, Massage, Meditation and much more...

3.)Existence as in the metal/grindcore/hardcore band that did "The Darkest Light" album (taken from their myspace site):

"Existence was formed in 1999 in Reno, Nevada. Over the course of the last seven years Existence has released two full length cd's of their own entitled "A HIGHER FORM OF HATRED" in 2000 and "THE DARKEST LIGHT" in 2002. We have also released three songs on a BattledScarred records compilation entitled "4 WAY DEATH MATCH" with Sworn Vengeance, Hostility, and Ex-Inferis in 2004. Existence also appeared on the Cali comp "ASEND THE DARKNESS" and distroed 12,000 copies of another song through tower records on the CHORD RECORDS/TOO DAMN HYPE sampler. We are currently recording a new full length cd and will have it finished by June 2006. This looks to be our best effort yet as the band is in the best shape musically that we have ever been. Our goal is simple: To destroy everything and everyone with our music. We have been described as Mathcore, Destrction Metal and Insane. We take pride in integrating technical aspects of our writing with fundimental perameters of Metal to create a unique sound of our own. Existence is lucky to have a wide and solid fan base in Reno, Nevada and up and down the West coast. We have shared the stage with many national acts such as BENUMB, SEVERED SAVIOR, IMPAILED, DECEMBER, FALL SILENT, ANIMOSITY, SWORN VENGEANCE, THE HOODS, HOSTILITY and many others. We have also played legendary venues such as GILLMAN STREET, THE PHOENIX THEATRE, THE SENATORS THEATRE, THE POUND, BURNT RAMEN STUDIOS and many others. Many upcoming shows and new cd in summer 06. ------ Here is what POWERSLAVE.COM had to say about us: "Band number two to hit the Phoenix stage was the rather impressive hardcore influenced sound from Reno, NV based Existence. Featuring a younger line-up and a full five members, Existence simply provides a chaotic, straight ahead speed driven, hardcore laced sound that was both buzzed and coherent. The crowd, apparently most of which had never seen this band before, tied into their sound by midway through their set and created some commotion on the floor. On stage, the band performed a selection of tunes, several of which appear on their latest recording "The Darkest Light". Their set included "Fearless" which offered a heavy chug to open and utilized an up and down sloped riff structure and "How Far Is Too Far" which featured a four step riff and some quick tremolo type picking. Existence seems to stick to a somewhat brutal and basic premise, moving the sound at sometimes such a blinding speed that the overall tone coming off the stage was simply one big ball of fuzzed out heavy hardcore. The throaty vocals picked the speed apart at times while remaining at their own pace at others, providing a good combination. Occasionally, with so much going on in their sound, the overall package seemed a bit loose with guitars bouncing all over the spectrum. Still, for pure sickness of riff and a full frontal brutality, Existence did it well, rivaling the last band of the night's reign as one of the more angry and brutal bands in the region". - POWERSLAVE.COM"

4. Existence is also a classic rock band hailing from Kurikka, finland. They have some own songs but mostly on gigs, they play covers including Stairway to heaven, Sweet Home Alabama and infamous cliche?, Paranoid.

5.Existence was the four-year solo project of one Allen Ashley Lucas. His ambitions were more "acoustic psychedelic" than punk, and while inspiration came partly from the DIY movement the major influence was Allen's lifelong love affair with Hawkwind (much more evident on the B-side). Lucas and occasional collaborator Jenny Yeatman traveled to Woodbine Studios in Royal Leamington Spa, where they enlisted a session drummer and The Specials' Sir Horace Gentleman on bass ...resulting in the song's rather remarkable extended cadenza (after they ran out of lyrics). (Note also Jenny's quite extraordinary vocal range.) After the 45, Lucas had poems and music reviews published in Hawkfrendz fanzine, and performed live with them in 1988, reciting/singing selections from his poem "The Space Cycle". As Allen Ashley he's become a celebrated sci-fi/ fantasy/ slipstream short-story writer and novelist (and lyricist for Foul House). He edited a collection of short stories, The Elastic Book of Numbers, which won the British Fantasy Society's 2006 Best Anthology award. www.allenashley.com (taken from www.hyped2death.com)

6. Existence is a power metal band from Germany. They have released 3 full-length albums so far.

7. Existence is a melodic hardcore/metal band from PA and NJ. Their debut ep, Misanthropy is out now. http://www.facebook.com/ExistenceNJ