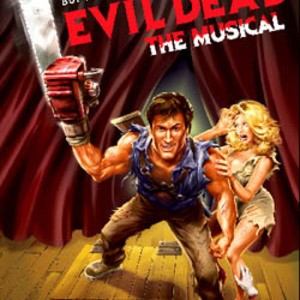 Evil Dead: The Musical is a Canadian off-Broadway show based on the cult classic film series. With the approval of both Sam Raimi and Bruce Campbell, a musical version of the film was staged, enjoying a successful workshop in Toronto and performances at the Just for Laughs Festival in Montreal in 2004. The New York off-Broadway production started previews on October 2, 2006. The Official Opening Night performance was November 1, 2006 and it ran, performing 8 times per week at the New World Stages, until February 17, 2007.

During the Northeast Blackout of 2003, the intransigent cast and crew performed the show on the front lawn of the Tranzac club in Toronto. The band played acoustic instruments and cast members provided sound effects from backstage. As the evening wore on, flashlights and car headlights were used to illuminate the actors

Fans enjoy the "splatter zone" -- the first three rows of the theater where patrons can count on a good blood-soaking. Ticket buyers in the Splatter Zone are advised to dress down. In fact, Toronto fans began wearing white t-shirts to take home later as bloody souvenirs which inspired the show's marketing team to start selling "I Survived the Splatter Zone" souvenirs. Ryan Ward, who stars as Ash in the musical, described it as being "unlike any theater show you've ever been to. One word I would describe it as is 'raucous.' It's like a rock concert."

Beginning January 9, 2009, the Willows Cabaret Theatre, in Martinez, California, will revive it's West Coast Premier of Evil Dead: The Musical. No word yet if original cast members will be returning.