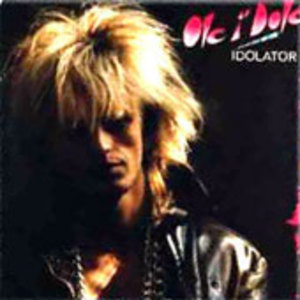 OLE EVENRUD was born in November 1962 and entered the music business as an artist in 1983. At the age of 21, he released his first album "BLOND OG BILLIG" using the alias "OLE I'DOLE". The songs were sung Norwegian language solely. His second album "POPAGANDA!" was released in 1985. Again, it featured Norwegian songs only, but on this record his collaboration with guitarist / songwriter TROND HOLTER (Wig Wam, Dream Police, Jim Jidhed) started.

In 1986, Ole met The Sweet's legendary Andy Scott, who wanted to produce Evenrude's next record called "IDOLATOR", released by RCA. With this album, Evenrude switched to English language. The record featured the catchy "X-Ray Specs", which was to become one of Ole's biggest hits. Thus, he included it on every of his later albums. The song was also covered by bands like ANDY SCOTT'S SWEET, Bai Bang as well as Sha-Boom and became a real rock anthem.

For his next album, "THIS OLE TOWN" (1987, released by Mercury), Ole Evenrude shortened his name to OLE, which seems to have been popular in those days. "THIS OLE TOWN" was produced by Geoff Downes (ASIA, BUGGLES, YES) and included the rock country hit-single "This town ain't big enough for the both of us".

His final album up to this day, is the most-sought after one: ?ONE SIZE FITS ALL?. The cover clearly shows the listener, what it will deliver: with anthem-like songs such as ?25 Years of Rock 'n' Roll? and ?Raise your fist and shout?, it really celebrates rock music. Responsible for the album's sound was Grammy award nominee NEIL KERNON from England, who is famous for his work with artists like STREETS, XYZ, SHY, KANSAS, DOKKEN, MICHAEL BOLTON, AUTOGRAPH, QUEENSRYCHE, JUDAS PRIEST and HALL & OATES among others. Ole Evenrude about ?ONE SIZE FITS ALL?. ?This is clearly the album I'm most satisfied with!?

After the album's release, Ole moved to Stockholm, Sweden, where he switched to songwriting and started producing albums for other artists. In 1993, Polygram Norway hired him as Head of A&R and Ole built his own private studio ?Hitsville? in Halden, Norway. He left Polygram in 1998 to become one of Norways most important full-time producers and songwriters, who has worked with rock artists such as WIG WAM, SWEDISH EROTICA, TONE NORUM, STAGE DOLLS, BAI BANG and SHA-BOOM, but also with famous pop acts such as ?World Idol? winner KURT NILSSEN, A-HA, ACE OF BASE, A*TEENS and THE TUESDAYS. At present, he also appears as one of the judges in the jury of the Norwegian ?Pop Idol? version ?Idol?.

One Size Fits All