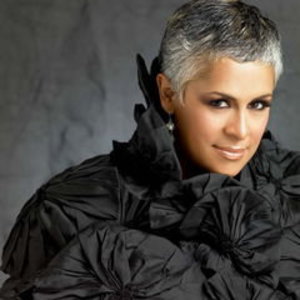 Eugenia Leon is considered one of the best female singers in Latin America. Called by the critics "The Voice of Mexico", she has delighted international audiences all over the world. Proudly mexican, Eugenia Leon is the voice of a passionate nation deeply in love with its roots. Born in the "City of Palaces" (Mexico City), Eugenia Leon discovers her musical calling at the College of Sciences and Humanities in Naucalpan, where she lent her voice for the compositions of her schoolmates.

During the turbulent 70's, young people started to identify with the musical movement known as La Trova, singing about latin american life, liberty, and soul.
Those influences defined her style and her future path, and she never looked back.
When she turned 18, she decided to study at the National School of Music. Those were hard times, constantly switching jobs, and learning from life's blows and surprises.
Encouraged by her sister, Eugenia Leon forms a musical group called "Victor Jara", with a totally latin american folk style. Afterwards, she forms the group Sanampay, with the same roots. She left Sanampay in 1982 to pursue a solo career, based on a repertoire of songs from contemporary mexican composers, and including also boleros and music from Brazil.
She releases her first recording in 1983, "Asi te quiero", and travels all over Mexico with a small group of musicians playing in various gigs.
Eugenia Leon's career takes a definite turn in 1985, when she enters the OTI International Festival at Seville (Spain) representing Mexico, with Marcial Alejandro's song "El Fandango Aqui". As a devastating earthquake hits Mexico City on September 19th, while she's competing at the festival, she transforms the pain of her people into strength, and turning her voice into the utmost expression of courage and hope, gets the first place award.
Since then, she has recorded more than 20 albums, all diverse and unique. Among the composers that have given her songs are Fito Paez, David Haro, Joan Manuel Serrat, Marcial Alejandro, Armando Manzanero, Jose Alfredo Jimenez, Francisco Gabilondo Soler and Maria Grever. She has also explored diverse styles such as mariachi, bolero and even tango, surprising everybody who thought rather difficult for a mexican singer to embrace such a complex, passionate and demanding style.
In 1998, the government of the mexican state of Veracruz grants her the Agustin Lara award, as homage for her excellent interpretation of the songs of the famous composer.
She worked with Pablo Milanes during his "Complices" Tour over most of Mexico, and also in his duets album "Pablo querido". She also sang with the renowned mexican Ramon Vargas on the production of the album "Corazon Mexicano", sponsored by the government of Mexico City.
In 2003, she hosted the tv show "Acustico" for channel 22 in Mexico City, where she interviews important musicians and composers from Latin America and Spain.
Commemorating her 30 years as singer, Eugenia Leon stages a concert at the National Auditorium in Mexico City (the largest venue in the country) on November 1st, 2003, selling it out completely. The concert was a spectacular show with mariachi Vargas and the Orquesta Sinfonica de las Americas, enthralling the audience with samples covering her whole career and musical repertoire.
Eugenia Leon is the best mexican singer according to many, while others also consider her a guarantee of high quality. In any case, she will always be the perfect way to maintain the musical spirit of Mexico alive and well.