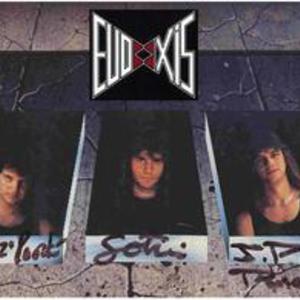 Eudoxis was a thrash metal band formed in 1984 in Montreal, Canada. They released the Metal Fix demo and video in 1985. The video received extensive airplay on the Canadian cable channel MuchMusic's "Power Hour." This was followed by the 1986 single "Attack from Above" and the 1991 album "Open Fire". The video for "Reach the Sun" was featured at the Los Angeles Foundations Forum in 1991 and still airs on both Much Music and Musique Plus.

They performed in spiked body armor and the drummer's kit included massive, six-foot long stainless steel bass drums. Eudoxis are credited as having the longest and loudest bass drums on record.

The 1991-1992 "Open Fire" tour featured the light show of Pierre "Metal Monk" Gendron and included songs written for their next album which was never released since Eudoxis disbanded in 1993. Deeply rooted in the philosophy of Socrates, the books of Homer, and the psychology of Freud, Sotiri Papafylis' lyrics dealt with the perils of war, torment, insanity, and triumph. Rick "Raz" Raczko explored the full potential of the bass guitar as a melodic lead instrument. This use of his custom made graphite neck, five-string bass is exemplified on the introduction of the song "Omnipotent Phantasies" and on their instrumental epic "Reflections of a Lost Past". A new generation of Canadian metal bands regard them as musical influences and their releases have become classics treasured by fans and collectors around the world.

In 2006, Eudoxis were asked to reunite for a large Canadian heavy metal festival but this long awaited reunion was not to be. Mars B. Alexander relocated to Toronto and formed Mars Project in 2004. Sotiri Papafylis currently sings and plays blues harmonica with Back Sabbath (a Black Sabbath tribute band).