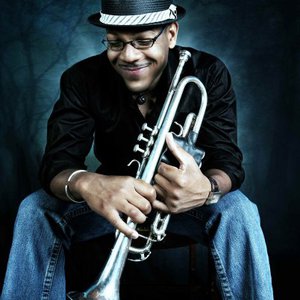 Etienne Charles (b. July 24, 1983 Port of Spain, Trinidad & Tobago) comes from a rich legacy of folk musical tradition going back four generations. His great-grandfather, Clement Monlouis emigrated to Trinidad from Martinique and soon after formed his band in Mayaro. His grandfather, Ralph Charles' distinct cuatro style can be heard on the classic folk and calypso recordings of the Growling Tiger.

His father, Francis Charles, was a member of Phase II Pan Groove, one of the world's top steel bands and one that Etienne himself would later join. Music surrounded him as a child, emanating from his father's vast record collection, the occasional jam session that would take place during the christmas season, the sounds of calypso, steel pan, and African Shango drumming. These formative years inspired Charles's playing and are evident in his sound today.

Etienne's musical journey began at home. Always a noisemaker, he would find himself drumming on desks, tables and whatever else he could get a sound from. His formal musical education began at Bishop Anstey Junior School where his music teacher, Mr. White taught students to read music, sing and play the recorder. Etienne began learning recorder when his older sister brought her own home from school. He took to the recorder like it was his own and began playing. He received his first trumpet at age 10 as a gift from his Uncle Peter and immediately began filling the house with noise, disturbing people near and far. On noticing his determination, his parents decided that on completion of his secondary school entrance examinations he would begin taking lessons. Etienne's success at common entrance earned him a spot in the prestigious Fatima College where he was a member of the school's football, cricket, swimming and water polo teams. At Fatima, he was the first three-time winner of the coveted Provincial Cup and the youngest student to ever win the award. He studied trumpet briefly with Major Edouard Wade and then at the Brass Institute where he would quickly become the youngest member of the school's professional band, TBI brass. TBI brass gave 12 year old Etienne his first taste of touring as they were featured at a festival in Cumana, Venezuela. At age 14, Etienne began to learn drums and percussion. He had his first theatre job, in the pit playing percussion for 'My Fair Lady' and then 'Treasure Island.' Etienne also began joining his father on the yearly ritual of playing on the road J'ouvert morning, carnival Monday and Tuesday and later for Panorama with Phase II.

At age 16, Etienne attended the summer performance program at Berklee College of Music where he studied with Lin Biviano and Tiger Okoshi. It was at this summer program that he decided that music was going to be his life. In August 2002, Etienne was awarded a scholarship and enrolled at the Florida State University, to pursue a Bachelor of Arts in Music. There he was exposed to jazz like never before and fell in love with the genre. He began performing with the faculty at jazz clubs in Tallahassee and nearby Atlanta as well as touring with FSU Jazz Ensembles. In 2003 he met celebrated pianist, Marcus Roberts and began studying with him. In the summer of 2005 Etienne placed 2nd in the International Trumpet Guild Jazz Competition in Bangkok, Thailand and performed at the North Sea Jazz Festival in the Hague, Netherlands. In March 2006 he placed 1st in the National Trumpet Competition in Fairfax, Virginia. Etienne graduated as the FSU College of Music's Brautlecht Scholar with his Bachelor's degree and was awarded a full scholarship to pursue his Master's degree at the Juilliard School in New York City.

At Juilliard Etienne studied with Mark Gould, Joe Wilder and Chris Jaudes as well as recorded and toured nationally and internationally with the Juilliard Jazz Orchestra. Fascinated with the artistry of New York he began working arduously freelancing in the scene. In November 2006, he released his first album, Culture Shock. In August 2007 he made his New York debut as a leader at the MoMA Summergarden series where he premiered 'folklore tales', a suite of original music inspired by the folklore characters of his homeland. In May, 2008 he received his Master of Music degree from the Juilliard School and was awarded the William Schuman Prize for outstanding achievement and leadership in music. Etienne is also an alumnus of the prestigious Henry Mancini Institute in Los Angeles where in 2006 he recorded on the album Elevation, which received two Grammy award nominations. He has performed and recorded with Grammy Award winners Roberta Flack, Ralph MacDonald, Wynton Marsalis, Johnny Mandel, Maria Schneider and the Count Basie Orchestra, legendary pianists Monty Alexander and Marcus Roberts among many other artists.