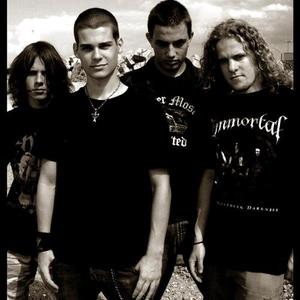 2) Essence is a Belgium Hardcore band. ESSENCE was founded in 2005 and went by the name ?Essence of Life?. After a lot of discussions and line- up changes due to several reasons, our current singer Fre reinforced the band and we decided to change our name to ?ESSENCE?. After rehearsing our old songs and trying to improve them, we felt it was time for a whole new beginning and started working on brand-new material. After we did a couple of shows with well- known international bands from the likes of Maroon, xDeadlockx, Deadsoil, Hatespere and many others as well as sharing the stage with local talented bands such as Chimaera , Morda and The Setup another line-up change occurred and our current guitarist, Maarten, came in to play. After finding our typical sound and working very hard, we got a lot of positive reactions and comments that inspired us to work even harder as a band and to enjoy ourselves as a group of friends and individuals. After a lot of thought and constant plan changes, we decided to record our first demo-mcd in the well- renowned Rape of Harmonies studio in Germany. In the summer of 2007 ESSENCE decided to part ways with singer Fre. Michiel a good friend of the band came in place. With our current line up ESSENCE is more driven than ever. We're aiming to get our music to an higher level and to destroy some venues in the future.

...was formed by Jan Ivelic-Pele (drums), Karmelo Marin-Chmite (guitar) and Damir Brkljacic-Beat Masta B (bass) in the 1996 as a death metal/hardcore band mainly under the influence of bands such as Napalm Death,cannibal Corpse,Death...... In the 1997 essence stopped playing because of some personal issues [Chmite turned towards Khrisna and went to the temple and Masta started pirate pussy hunting career]. 1998 was when the band was formed as we know it now (metal/hardcore/noise) Chmite gathered people that would love this metal/noise mixture of styles till present days, Pele returned as a spine of the band and Ivo Vatavuk-Frusta started as a vocalist. Few months after that we recorded and released our first demo material in 1998 called "Dirt in frame" on our own and Ognjen Pavlovic-Lupez(now a member of TBF) came into the band as a bass guitarist. We activly played for about a year and decided that we should introduce Marin Dumanic-Manir to the band as second guitar. In that period we had few gigs and the time came to record some new material. In the end of 2000 we started the recording of 9 new songs, again on our own, and in the winter of 2001 our second demo was released under the name "Rea". In the begining of 2001 we had a lineup change and Manir was replaced by unfuckable rock machine Ranko Smoljan as an excelent new guitarist. In the winter of 2002 we went on tour and after few days on road we realised that we have some mental differences with our bass guitarist Lupez. So after returning home he left the band and shortly after that was replaced by Vinko Madirazza Ravlic-Rufio Oppossum Fuckwind III. 2003/2004 we started to record [on our own one more time] our third demo material "Larva", and we had a few gigs presenting this material to the local audience! We feel that in this lineup we are complete and we are ready once again to make some music and play it loud and live...

4) Austrian hardcore band which have recently released an EP.

6) Alias of the trance artist, The Space Brothers: Richard Louis Simmonds & Stephen Christopher Jones. Released two singles, The Promise in 1998 and Wings Across the Universe in 2004

7)The Indian metal band Essence is a one man project by budding guitarist Siddharth Nair, currently(2010) guitarist for Blind Image. His sound may be described as a mix of djent and electronica. He can be found on
http://www.reverbnation.com/siddharth

8) New Wave band from The Netherlands
Formed in 1984, while still in high school, the four members gigged for a year before releasing their debut album Purity. They released a 12" single, entitled Endless Lakes, which became underground hits in both Germany and Holland. Describing their music as a variety of musical styles ...from sheer power to dreamy ballads, ever changing, evolving, sometimes reminiscent of vintage Cure or a postmodern Pink Floyd. They also achieved a club/dance hit with their second single The Cat. Their tunes range from Gothic dark, intense ballads to eloquentlky craft guitar washed pop tracks. Their singer, Hans Diener, has a voice which would even make Robert Smith stop and wonder who was singing their songs. The Essence have continued to create music into the 90s with their albums, A Monument Of Trust, Ecstasy, Nothing Lasts Forever, Dancing In The Rain and Glow.

Wings Across The Universe